Concert review and photos by Matt Cole and Linda Boney

On Sunday, the 24th of November, I caught an enjoyable double bill of Dawoud Kringle‘s eclectic ensemble Renegade Sufi and Holly Cordero‘s jazzy project Truculently Audacious at Alphabet City’s Drom. Though different stylistically on the surface, these two bands nonetheless went quite well together. 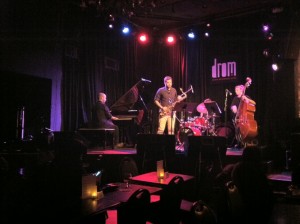 Up first was Truculently Audacious, consisting of Holly Cordero on double bass (and compositions), Renato Diz on piano, Drew Williams on saxophone, and Mareike Wiening on drums (or so-listed on Drom’s site; I thought I heard Cordero introduce her as “Colleen.”) Overall, the band’s sound covered a range of jazzy feels, from straight ahead with a hint of bossa to angular and avant-garde, with the mood ranging from dreamy to driving. Cordero’s simply-titled compositions, such as “Odd Waltz” and “Ballad No. 2” provided good framework for the band’s sonic explorations. The individual members played very well together, making for a coherent, tight unit with good rhythmic and spatial interplay between the members. Cordero proved to be a fine soloist, her playing ranging from lyrical to staccato, and she was not afraid to leave space. When playing rhythm, she kept things interesting as well, sometimes playing a walking countermelody to the lead, at other times using variations to good effect. Tenorman Williams had a strong, breathy tone, and his playing ranged from straight-out bluesy to reminding me of the rising Dutch altoist Tineke Postma. Pianist Diz had a nice, light touch on his comping, locked in well with the rest of the band, and in addition to playing some enjoyable solos, also did some string-plucking that sounded like an eerie harpsichord. Drummer Wiening’s playing ranged from light textures with mallets to stormy beats, and at one point caught my attention with a very nice three-tone rhythmic throb using the toms and kick. Overall, this is definitely a unit to check out. 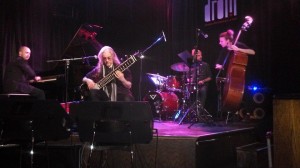 Up next was Dawoud Kringle’s Renegade Sufi, consisting of Mr. Kringle on sitar, dilruba, and vocals; Alessio Romano on drums; and Holly Cordero (bass) and Renato Diz (piano) from the previous band rounding out the unit. Right from the beginning, the band showed an olio of influences, with an initial drone yielding to a building lead in the sitar (complete with effects), a chorded bass line right out of funk rock with matching drums, and a piano comp that was part jazzy and part r&b all combining to create its own musical whole. I could have done with a better mix at this point; in particular, the sitar needed to be turned up relative to the rest of the band. Still, it was loud enough to enjoy Kringle’s Eastern scales and technique being played with a rock sensibility. Kringle used an array of effects, ranging from delay to a number of different doubling tones (including some choral ones), to, well, good effect, driving the music to a peak, after which came an interlude of dreamy piano. The music began to build back up, and Kringle came in with a bluesy sitar lead; bluesy, but with an open sound, perhaps like an Indian scale, or maybe a Lydian mode.

The band segued right into its next piece, a tune in 9 with a driving rhythm section, ethereal piano, and a strong sitar lead. Again, Renegade Sufi was showing its ability to meld a variety of different sounds and feels into a coherent whole. By this time, the mix had been fixed, and Kringle’s sitar was at an appropriate volume level relative to the rest of the band. This particular song was also a demonstration of Renegade Sufi’s facility with rhythm; they made the 9 sound like a double meter with an extra beat slipped in, but they somehow made it groove, rather than stagger. Diz showed another side of his playing on this one, taking a solo that would have fit right in with the better fusion or prog rock from the early ’70s, and Kringle at points reminded me of the psychedelic player Sitar Joe from Arizona, another explorer of the possibilities of the sitar outside of its traditional musical idioms.

Kringle then introduced the band, and gave the name of the two pieces we had just heard: first was “Will to Power” (almost misread by Yours Truly in his notes as “Will to Piano”), and then, appropriately, “Nine Invisibles.” Up next was “Burn the Idols,” which sounded both South Asian and Modern Jazzy, and had an odd-meter rhythmic sound despite being in 4 (yes, I counted). The rhythm section showed a very deft, sensitive touch on this one, with Romano playing soft, gentle drums to go with a spare, Latin-inflected bass from Cordero. Kringle’s vox-effect-inflected lines in this one definitely sounded Indian, and he also tapped on his sitar, making it a percussion instrument. 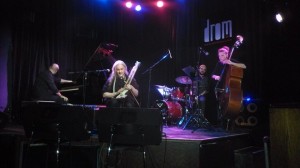 For the last two pieces of the night, Kringle switched to the dilruba, an instrument which looks like a sitar, but is played with a bow, and thus sounds a bit like a sarangi. First up came “Failed Rose,” which Dawoud described as being about a woman who broke his heart. The song started with a slow gentle rhythm under a lead dilruba line, and had hints of Pink Floyd’s “Wish You Were Here.” Kringle and Diz played very expressive solos on the dilruba and piano, respectively.

Last up was a variation on Jimi Hendrix’ “Voodoo Child,” which gave Kringle a chance to showcase his love of the late guitar wizard. Kringle sang blues on this one, and then played a dilruba solo over a driving, monochordal rhythm (not unlike a slow version of Mississippi drone blues). The solo got hotter and hotter, entering full-on pyrotechnic turf, while the rest of the band went outside, while somehow maintaining the underlying rhythm and pulse. Then the music flipped back to an ominous beat, and that was that.

This show was a great first experience for me of Renegade Sufi, a fine unit which, like a lot of the most creative musicians today, pulls disparate musical influences into a coherent whole. As befits a band whose leader lists Jimi as a big influence, they have a fiery and propulsive sound, with bandleader Dawoud Kringle, a member of that unusual species: the sitar shredder, a friendly, mystic figure on stage. Truculently Audacious was also quite enjoyable; both bands are definitely worth seeking out and enjoying for fans of creatively eclectic music.