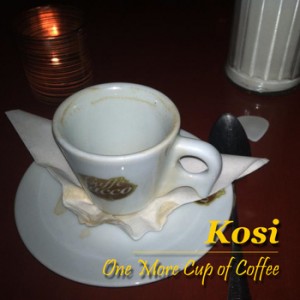 You can download or purchase the album on Amazon, BandCamp and kosi-sings.com.

A guitar riff asserts itself, and a female voice insinuates itself into the melody of the Mingus classic “Goodbye Pork Pie Hat.” The track, dominated by Aron Marchak’s guitar, has the voice lurking in the shadows, waiting for the proper time to emerge. No urgency to make herself known; she will appear on her own time.

Thus begins the CD One More Cup of Coffee by NYC based singer Kosi (a.k.a. Kosi Gyebi Sorensen). Her debut full length album.

Unlike many jazz singers who rely heavily on reinterpretations of standards, original compositions dominate this CD.

The title track is a soul / blues with the guitar riffing with a bluesy bass line. This contrasts with many of the other songs, which delve into the jazz vibe.

Marchak’s guitar holds things down beautifully. He is a very skilled and creative jazz player, more than equal to the task of filling the role of accompanist and offering both support and contrast to Kosi’s singing.

The song writing is strong. The chordal harmonies, while rarely deviating from the genre of jazz song (which is what these compositions are), evoke the intended mood of each song very effectively. Most of the songs are jazz songs; but there are veins of blues running through the collection.

Kosi’s vocals, however, are the centerpiece of the CD. Her voice is strong, and shows excellent control and skill. But what truly impresses the listener is the raw sincerity and honesty of each song. These are not mere imitations of jazz standard styles that form a nail upon which the vocalist hands her chops. This is poetry; as real as anything Joni Mitchell or Cassandra Wilson would write. The listener is left with the inescapable impression that they know Kosi intimately. One experiences the subject of the song through the powerful lyrics and emotional delivery of the song. This is especially true due to the raw, stripped down line up of guitar and vocals: there is no place for the essence and mood of the song to hide; and Kosi doesn’t hide anything, holds nothing back, and gives everything. There is no escaping Kosi’s heart: you experience what she has experienced. Her stories are those of someone who has experienced life, lived as deeply as anyone could, and knows how to tell her story.

If you want a contrived, overly thought out production designed to make a specific impression conforming to standardized musical marketing demographics, do not listen to this CD. The music here is as real as it gets.