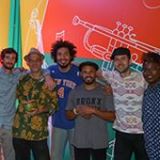 On an unseasonably warm winter night, in the subterranean comfort of Drom, the Underground Horns (describing themselves as “a 6-piece brass band playing afro funk bhangra new Orleans Latin grooves and beyond”) came out swinging with a heavy fisted, heavy grooving rendering of Mingus’ “Goodbye Pork Pie Hat.” The arrangement was so unlike the original that one may have been taken aback, had it not been so skilfully executed and utterly enjoyable to listen to.

Based in Brooklyn and led by German born saxophonist Welf Dorr, the band also consists of Andrew McGovern (trumpet), Freddy Gonzalez (trombone), Chanell Crichlow (tuba), Kevin Raczka (drums) and Okai Fleurimont (djembe, vocals). They have two CDs out (Funk Monk released in 2009, and Big Beat released in 2010). They have performed everywhere from subway stations, parks and clubs such as Nublu, Barbes and Brooklyn Bowl, to the NYC Winter Jazz Festival, the Lowdown Hudson Blues Festival, and Lincoln Center, to Brazil, Egypt and Germany. It was a bit of a surprise to learn about another German saxophone player/band leader in NY. I refer to the Magnetic Ear CD review I wrote. It would be interesting to see both bands to share the same stage.

On this night at Drom, they continued with an old school funk tune. Crichlow’s tuba playing strode like a Titan and Fleurimont and Raczka drove the groove mightily, paving the way for the sax, trombone, and trumpet to soar over the funky terrain, weaving their statements into the fabric of the groove.

After Dorr invited the audience to dance, adding “Lets have a party,” they launched into another funk excursion called “Full Moon.” The horn players displayed deft jazz chop, deviating from the party atmosphere their music generated.

For the next song, Fleurimont did the vocals on an original song called “Creole,” dedicated to his Haitian people and ancestors. The lively and relentless rhythm underscored the inherent passion of the song. It mattered not that most of the audience didn’t understand the language it was sung in; the meaning was clear enough.

They continued with a song from Zimbabwe called “Shomba.” The heavy groove was still there, but the melodic vibe of the song deviated from what they’d played so far in that it was more introspective and serious. An almost Spanish/Arabic sadness formed a musical subtext; and let the audience know the message was a heavy one.

Their final song returned the audience to the party atmosphere from whence it came. The whole performance exuded superlative musical skill, and an infectious energy of joy. Truly a pleasure to be part of!