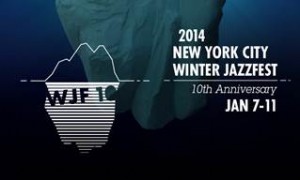 The NYC WINTER JAZZFEST turns 10 years old in 2014.  In celebration of this milestone Winter Jazzfest is expanding to five nights from January 7th through January 11th.  The festival will be presented in 9 different venues and will feature over 90 different groups including over 400 musicians.  Winter Jazzfest upholds the continued mission to showcase top quality jazz to industry professionals, avid jazz fans, and new audiences.
Winter Jazzfest was established in 2005 with the goal of introducing underexposed artists – those that impacted the jazz scene of that period — to professional presenters attending the Arts Presenters Conference (APAP). At that time, jazz groups were underrepresented, although they were (and remain) culturally essential to the continued development and future of the music and audiences.  Winter Jazzfest is pleased to continue our mission of offering a forum for presenters and music enthusiasts to experience and support the future of jazz.

In this 10th Anniversary Year, Winter Jazzfest is pleased to welcome back artists that performed in past seasons, including a special piano duo show at The Town Hall with Robert Glasper and Jason Moran as part of the Blue Note 75th Anniversary series.  Another highlighted returning artist is drummer Bobby Previte, performing TERMINALS with fellow Winter Jazzfest alums Nels Cline, John Medeski and So Percussion (just announced).  The Revive Big Band returns to Winter Jazzfest, this time performing a preview of a show they will perform at Central Park SummerStage in Summer 2014 featuring the music of Blue Note Records.  Other returning groups performing on the two-day multi-venue Winter Jazzfest Marathon include Marc Ribot’s Ceramic Dog, Mary Halvorson, Jeff “Tain” Watts, Darcy James Argue, Keren Ann, Burnt Sugar, Don Byron, Elliott Sharp, 3rd Eye 4tet: McPherson, Waits, Burton, Hurt (a new formation of Aethereal Base and reunion of Cause & Effect), Gretchen Parlato and many others.

Finally, we’re thrilled to welcome Henry Threadgill, who will be making his debut appearance at Winter Jazzfest with the world premiere of his “Ensemble Double-Up”, Led by Threadgill and featuring Jason Moran and David Virelles on pianos, Curtis McDonald and Roman Filiu on altos, Christopher Hoffman on cello, Jose Davila on tuba and Craig Weinrib on trap drums, honoring his dear friend and WJF esteemed past festival participant, Lawrence D. “Butch” Morris (who passed on January 29th, 2013), in his composition written for the occasion, “Old Locks and Irregular Verbs”, which will take place at the historic Judson Church on Saturday, January 11th.

A five-night Full Festival Pass is available for purchase now for $95 (full value is $125).  All other ticket options for single night shows and the two-night marathon pass (Jan 10 and 11) are also available now, more details below.

Winter Jazzfest welcomes all Arts Presenter conference badge-holders to obtain a single discounted Two-Day Marathon Pass to the 2014 WINTER JAZZFEST (good for Jan 10 & 11) by emailing rsvp@winterjazzfest.com.  Only 2014 APAP Conference attendees are able to RSVP for the discounted pass.

This night is made possible with support from Six Point Brewery

80+ Groups performing in 9 venues over 2 nights

edited…  Schedule To Be Announced soon…

If you are a 2014 registered APAP delegate you have the opportunity to attend the 2014 NYC Winter Jazzfest Marathon at a reduced price, please rsvp@winterjazzfest.com for more details.

Mostly Other People Do The Killing

+ more to be announced soon…