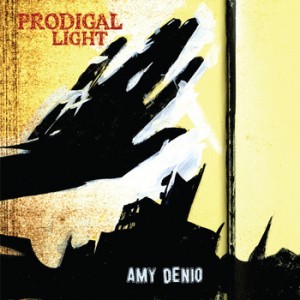 “Amame” opens Amy Denio’s latest CD release Prodigal Light. An electric guitar figure lays down a foundation for Denio and the others to fill the air with lush vocal harmonies. The song has a very “old world folkish” feel that lures the listener into its peaceful and contemplative world. Flutes and a rubbery bass part work their way into the hypnotic song. It ends without warning.

Denio is a Seattle based multi-instrumentalist composer, singer, music producer and a member of The Tiptones and Kultur Shock. She’s composed for dance, theater and film, has received numerous grants and fellowships, collaborated with many artists throughout the world, and performed throughout Europe, North America and Asia at countless festivals, clubs and other venues (including schools and prisons), and even ancient ruins.

It is clear with this line up that the CD was not your average singer songwriter.

The CD continues with the title track “Prodigal Light.” A thick 12 string guitar provides a backdrop for a growling trombone. Denio sings about the coming of darkness. The chorus carries a suggestion of country music. But this is not country. The trombone takes a solo that, while not harmonically or melodically “out” has its own story to tell and its own way to interpret the story Denio is telling.

A mournful accordion opens “Ballintubber Abby” leads us to a sad story Denio sings about a man who died before his time. The lyrics, with their unmistakable Celtic feel, tell a compelling story.

Denio abandons the folkish in favor of the avant-garde on “Exposure to the Infinite.” A short collage of vocals (sung, chanted, and spoken) and noises creates a startling contrast to what we’d heard previously. This leads to “Pass Offer.” A watery percussion and glockenspiel dance in the background while Denio sings a strange nursery rhyme like poem. Vocal noises and an indistinct accordion lurk in the background.

“Beirut” is a lively dance whose enthusiastic feel contrasts the gloomy and horrified lyrics that, nonetheless, keep a hopeful outlook on the future.

Denio’s idiosyncratic and iconoclastic approach to music is highly creative and very well executed. Her skill and talent are evident; but her greatest strength is her fearless exploration of music on her own terms. She has a unique view on the world, and communicates this in her music on her own terms. We are privileged guests and eavesdroppers in Denio’s World.

The 10th release by the The Tiptones Saxophone Quartet (plus drums)!!!

The Tiptons Sax Quartet and Drums: an all-female saxophone quartet jumping around the world!!!