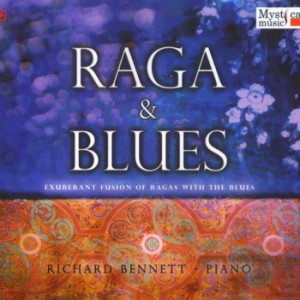 The CD begins with a tambura and sparse notes on piano that introduce an alap in Raga Malkauns. This gradually opens up into a rolling swarm of notes somewhat reminiscent of Michael Harrison’s piano work. Above this thick tapestry, melodies would appear and disappear. Occasional suggestions of a teehai would rise.

The second track, “Jersey Blues,” also based in Malkauns, begins with a bass lick (played by Gaku Takanashi), a bluesy piano riff, a blues shuffle, and tabla (played by Naren Budhkar). The 1/4/5 chord structure of the blues eliminates the possibility of a “pure” raga of any kind. Malkauns disappeared in the blues structure. But as I listened, I wanted to hear where he’d go with this. The bass took a very aggressive solo. The piano drew the song deeper into the blues, which Bennett is very good at.

The song was followed by “Chow Hop,” also in Malkauns. The tabla starts a fast beat, with Bennett making introductory flourishes, from which a melodic composition emerged. This was more closely tied to the essence of Malkauns; but Bennett did something to it that classical raga does not do. Budhkar took a marvelous solo at breakneck speed. The piano excursions went on and finished in a harmonic teehi.

The pattern behind the CD now emerges: Bennett is interpreting raga through American musical form; and creating a triptych as a framework.

He continued this process with the next three songs, all in Raga Todi. “Raga Todi” is another alap. Bennett began by emphasizing the more “dissonant” aspects of Todi, then softening it slightly to a repetitive pattern upon which melodies are laid. But he evokes a sombre and almost foreboding mood from Todi. He expertly draws upon the classic melodic movement of the notes in Todi, while keeping a left hand pattern that drives the mood forward: a strong suggestion of Philip Glass here.

The next piece, “Saffron & Camphor” bring the bass and tabla in a 16 beat (teental) cycle. Bennet’s use of ostinato patterns is strong here; and the occasional chord changes (while never deviating from the notes in Todi, are well outside the classical tradition) that provide startling contrasts to the hypnotic undertow of the piano and bass. The final part of this trilogy, “Bandara Blue” attempts to bring Todi into the blues; and like with “Jersey Blues” he has to go outside the raga. But much of the song has more of a Spanish flamenco and jazz feel, without actually being so in any definable way.

The CD concludes with two songs in raga Jogkauns (a combination of two ragas; Jog and Chandrakauns, created by Pt. Jagannathbua Purohit). “Raga Jogkauns” is an alap; Bennett explore this as he had with the previous alaps. A left hand pattern provides a backdrop for the exploration of the raga. “Salute to the Seven Khans” finished the CD. A gospel/soul vibe with tabla holding down the beat provides an interesting and incongruous tribute to the Khans (which the liner notes of the CD do not name).