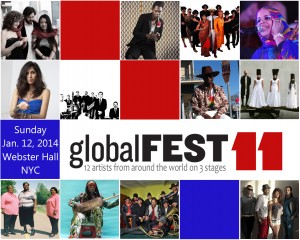 I arrived early at the globalFEST 2014, held at NYC’s Webster Hall. Things were already livening up. People were pouring in and milling about in anticipation of a great musical event.

The first performer I caught was Brushy One String. This was my first exposure to him. Before the performance, at the center of the stage there was a dilapidated looking guitar on a stand with only one string. I realized this was not going to the your average singer-songwriter guitarist. With no band, he came on and, while playing a reggae like bass line and augmenting it with slaps to the body of his guitar, he sang like a mad Rastafarian who’d grown up supplementing his listening with vintage soul and r&b. Here is a man who has contributed to the classic troubadour tradition with his own scaled down and very endearing approach. He knows how to draw an audience’s attention and keep it. His set was well paced. His vocals, while not virtuoso, were marvelously versatile and enjoyable. Brushy is a man who clearly knows how to turn his colorful personality into a fun show. One of the best parts of his show was when he broke his string. He grabbed a regular six string guitar, and continued. And of course, he only played one string. After playing the old Motown classic “Just My Imagination,” and Bob Marley’s “Get Up Stand Up” and “No Woman No Cry,” he concluded with a song about himself and why he plays only one string. 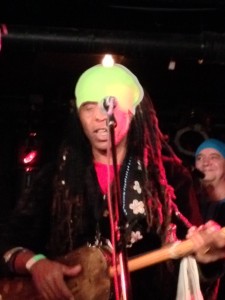 I was really looking forward to Hassan Hakmoun. The sextet took the stage, and after some last minute tuning, they opened the floodgates of the musical energy of Gnawa. This band, led by the venerable Sufi with his sintir invoked wondrous trance like rhythms and melodies that laughed, shouted in ecstasy, and cried out to the Beloved. There is nothing in the world to compare with Moroccan music. Hakmoun and the group masterfully ride the waves of their powerful music with a set that was joyful and ecstatic.

I caught the last half of Dakhhabrakha‘s performance. The ethereal sound of a post-modern Slavonic wail filled the main ballroom. The quartet (three percussionists, one who also played keyboards, and one of whom – the only man in the group – also played accordion, and one cellist; all of whom sang) brought forth an unearthly musical experience. Suddenly, they broke into a lively gypsy dance. This was a pleasant and startling contrasts that woke the audience from the trance dreams they’d sent them to before.The women sang astonishingly tight vocal harmonies that cut through and flew above the percussion. Their music was powerful and infectious: and impossible not to be swept away by. Their visual appearance was striking: the man, bald with a goatee, was dressed in a black tunic. The women wore white dresses and black felt hats the American eye automatically associated with Russia/Ukraine.

Mauritanian singer Noura Mint Seymali played to a packed room. Her powerful Afro-Arab vocals soared and emote against the backdrop of the hypnotic beat the band provided. The guitarist was often in complement with the vocals, never clashing, but not content to be in the crack ground (and he REALLY liked his flanger). There was no song where he didn’t use it). The drummer was solid and the bass player locked into that state of musical mind afforded only to the bass frequencies (and spent the entire set sitting on a stool, chilling). Seymali nonetheless dominated the stage in a very feminine and almost maternal way that only women from Arab cultures can. She also played an unusual harp like string instrument I couldn’t identify. It resembled a kora; but was not played anything like a kora. At one point during the set, they started a song as a blues, which then melded with North Africa; all the while Seymali dominated the hypnotic trance with an astonishing display of vocal prowess. At another point in their set, they played something with an unmistakable Moroccan rhythm. And the lyrics – what I could understand – were all praises to Allah. Modern Sufi music at its finest.

Lebanese (by way of Paris) singer Yasmine Hamdan and band made a dramatic entrance to a thick beat, shimmering guitar, and lush synth pads. The band consisted of drums (whose heavy Arabic influence was obvious), keys/laptop, and guitar/bass. Hamden made extensive use of processing on her vocals. Her voice is sensual and passionate in that impossibly beautiful way only Arab women can lay claim to. Their sound was a dark and shadowy rock with the Middle Eastern vibe inextricably woven through it. A few of their songs had a strange punk/kitschy vibe, which somehow seemed to dispel the sensual depth they’d conjured with such style. That aside, the music was constantly interesting and took some interesting excursions outside the dark sensuality; such as one song that began as an acoustic ballad that spoke of history repeating itself. The final song was an interesting drama about the interaction between a very young woman and an older man who is attempting to get her to surrender her virginity. Hamden is an excellent front woman; marvelous vocals, beautiful, and knows how to keep the visual aspect if a performance interesting.

All in all globalFEST presented another fine concert. The opportunity for many of these artists to perform in the US is a marvelous accomplishment, and service to the musical community.

Event review: A Night at globalFest 2013