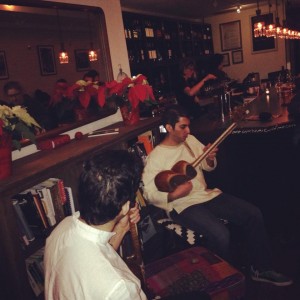 On Saturday, the 4th of January, I went down to Cafe Nadery in the West Village to hear some Persian classical music, played by the brothers Siavash and Kaveh Haghtalab. Cafe Nadery is named for an establishment in Tehran which, in the ’40s and ’50s, was one of the spots at which intellectuals gathered. The version in New York is a long, narrow room, with many pictures of notable Iranian writers and thinkers on the walls, and a bookshelf located behind where the musicians were to play, filled with a variety of titles, including books on Iran, chess, film noir, and a large selection in Farsi.

Soon, the musicians were ready to play, a brotherly duet consisting of Siavash Haghtalab on the tar (the Iranian analogue to an oud, or bouzouki) and Kaveh Haghtalab on kamancheh, a small bowed instrument which is played upright and the sounds of which reminded me of Madras fiddle music and the wonderful Baluchi sounds that I heard on a CD entitled Mystic Fiddle of the Proto-Gypsies. Before the music, Siavash talked a little about Persian classical music, realizing that at least some of the audience would be unfamiliar with it. He explained about the “seven famous modes” that are the backbone of Persian music, and told us that tonight we would be hearing two: Mahoor and Abou Ata. He also described the various parts of the pieces, ranging from rhythmic, to romance, to rhythmic with singing, and then invited the listeners in, saying, “Imagine a garden you’ve never been in before. This music will take your hand, and show you into this garden.”

The music began with solo tar, mainly descending figures with rapid picking and chording not unlike what can be heard on similar instruments from Greece to India, though definitely with its own Persian flavor. In came the kamancheh with a rhythmic triple meter that reminded me of the Baluchi music mentioned above. Soon, the music had shifted, now the tar was playing cheerful chords, with a hint of Irish, while the kamancheh played lyrical lines, with hints of Madras violin, albeit with less note bending.

Throughout the piece, the Haghtalab brothers proved adept at making smooth transitions between different sections, and making quirky rhythms sound smooth and natural. Kaveh covered a lot of ground with the kamancheh, at times adding left hand rhythms with adroit use of double stops, at other times adding lush harmonic layers to a trancy lead line that his brother was playing. At one point Siavash was singing in unison with the kamancheh line that Kaveh was playing, while his tar added subtle turbulence under the peaceful musical surface. A little later in the piece, Siavash was on his own with the tar, playing slow and free, punctuated with rapid motifs, with the sound getting more and more lush over time, and picking up hints of India towards the end of the sequence.

Soon Kaveh came back in, and the instruments sounded hopeful, with hints of Appalachia and in odd rhythm, while Siavash’s vocals evoked the crescent from Iran through Pakistan to Northern India. At this point, the guy sitting next to me was singing along, and actually not too badly. And thus the set ended.

The second set started with the same mode, so this time I listened to the more general shape of the music. Siavash often played fast, with rapid picking and fluid rhythms, often darting about whimsically on his fretboard. Often, his harmonic feel was like that of a Madras violin and percussion combo: the Thalya Vadya Ensemble (which you, the reader, should also check out). Kaveh’s playing often had that trancy Baluchi vibe which I’ve mentioned, and at times managed the neat trick of feeling like both Appalachia and India at the same time. 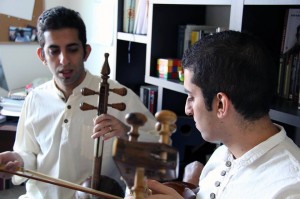 The last piece of the night was in the mode Abou Ata, and started with the brothers playing in unison in a triple meter that definitely did not feel like Western music (though one line somehow reminded me of Bach). The instrumental unison sections of this piece seemed to have a particularly nice timbre-mixing effect. I also noticed here that sometimes the scales and note intervals sounded a bit off for Western aural expectations; it’s a good thing to stay on one’s sonic toes and remember that there are many ways to make a cool-sounding scale. This piece was more minor-sounding, though at times with a hint of a major key, not unlike a melodic minor or Dorian mode. Again, the musicians stretched out rhythm and time, building to a rain of notes from the tar and kamancheh, and ending with singing alternating with rhythmic unison from the instruments.

After the show, I got to talk a little with Siavash, and mentioned to him the Appalachian and Irish sounds I’d heard. He told me that that was deliberate; when playing for audiences unfamiliar with Persian classical traditions it helps to include something that’s a little familiar. We also talked a little about the context of the music, and how it was generally played in small ensembles in intimate settings, as it is a highly improvisatory form, and can be hard to translate to large groups.

Overall, this was a fine performance by two masters of a venerable tradition, one which influences and is influenced by its many neighbors but nonetheless is its own unique and subtle mix of sounds and modes. The garden into which Siavash and Kaveh Haghtalab guided us that night in Cafe Nadery is a lovely one, and I look forward to exploring it further.