Not long ago, I reviewed Kosi Gyebi‘s CD  One More Cup of Coffee. I’d heard her guesting with a jazz band; now I wanted to hear her as a leader live. So, I bundled up, went toe to toe with a nasty cold night, and headed uptown to Silvana. 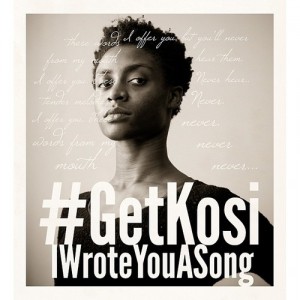 She had no band. Her backing was guitarist Aron Marchak.

Lush guitar chords signaled the beginning of “Naima.” Assuming a crouching position (as she often does on stage at moments where she evidently feels the need to deflect the audience’s attention away from her), Kosi sang the melody wordlessly in clear, crystalline tones that had a soothing and inviting effect. Explored the contours and possibilities if the familiar song. It ended with a delicacy that held the audience in a gentle but inescapable grip.

They continued with “God Bless the Child.” She took the audience through the song in her own style; and sang it with the authority of experience.

The next two songs were originals. “Rihanna” was a powerful ballad about a friend. “One More Cup of Coffee” told of struggling with inner issues and futilely trying to solve them with drink; and paying dearly for it physically and emotionally. Both songs were delivered with the emotional content and sincerity the songs demand.

After another song, she announced, “the darkest lullaby you ever heard in your life.” Shimmering, quivering chords set the stage for Kosi to keep her dreaded promise. The dark intimacy she created was almost frightening in its intensity.

They followed with a bright and playfully flirtatious “Satin Doll.” During this, the audience (who had been strangely quiet) woke from the dreams where Kosi sent them.

They followed with an original. “Little Miss Generous” is a sad song about a woman whose generosity ultimately cost her own well-being. One was forced to ask who this was. Did Kosi know this person? Was she exposing part of herself? Perhaps such a question is too personal to ask: and we must be content with seeing this story reflected in our own lives.

She finished with “Valerie;” a song that spoke to a lost friend (or past love?) whom she still held feelings for.

Throughout the set, Marchak played brilliantly. A set of solo jazz guitar is a very difficult thing to play, let alone make interesting. Marchak handled himself well, and offered both an consistently full and interesting accompaniment to Kosi’s vocals, and presented beautiful and imaginative guitar work that stood on its own merits.

Kosi has the ability to project the inner meaning of a song. The singers who use the usual devices to portray emotion (whom we see on TV shows like The Voice”) seem weak and impotent in comparison. Her range of vocal skills aside, Kosi does not merely sing; she becomes the song. She navigates the same treacherous artistic (and emotionally dangerous) waters as the likes of Maria Callas or Meshell Ndegeocello in that she is not just showing vocal chops, or acting the story of the song. She lives it and makes you feel it in the most overwhelming and deeply personal way possible.