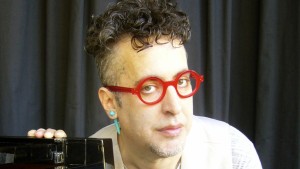 On a Thursday night in Brooklyn, I arrived at the Brooklyn Raga Massive at the Tea Lounge late. The Richard Bennet Trio (Bennett on piano & melodica, Kevin Reily on bass, and Naren Budhkar on tabla) was finishing a piece that Bennett said was inspired by a bar fight in Japan.

They continued with a piece about New Jersey (!). The piano began with a rolling and moody rubato: almost like Philip Glass. Then, they went into a blues! This was, naturally, most unexpected. Budhkar took a brilliant solo in this unlikely musical setting. This eventually became a gospel stride, which the presence of the tabla was also somewhat incongruous. Yet the musicians ayes well together and made it work.

Reily was marvellous. He took some solos that displayed a fluid grace that held undeniable power

They continued with “The Swan Suite”, the sections of which they played in reverse order. An 8th note pattern on D created a foundation for a chord melody if a decidedly oriental character filtered through a New York sense of ballad. The tabla came in, and his part seemed to be thinking more in terms if tal cycles than in western percussion, augmenting the oriental flavor. The presence of minimalism attempting to bridge east and west was inescapable. The next movement was more upbeat, and, while not deviation from the minimalist structure, or from the D, had a more optimistic mood. The tabla was more free in this movement. He took a solo at breakneck speed, ending with an intricate teehai. Then the bass soloed for a short time, preferring a more reserved approach. The third section was a compete change in style. The piano established the song, and then took a solo on melodica.

They concluded with raga Puri. The alap was played with the bass in the tambura role. The piano approaches it in a very pianistic fashion; and again, the rolling arpeggios suggested the presence of minimalism. When the jor began, it took on a feel that reminded me of Oregon as interpreted by Chick Corea.

They played an encore. A gospel tinged ballad. This one, the tabla seemed to have a bit if difficulty finding a place to put its unique voice.

My only complaint was that there was occasional feedback and a less than favorable mix in the sound of the piano and bass. Some of the subtleties of the bass were lost. Nonetheless, the music was very imaginative and conveyed a wonderful sense of emotion, imagination, and humour.

One thing about Bennett that’s obvious is that he has a very American approach to raga. Perhaps it’s the nature of the piano, but while he is knowledgeable and respectful of the raga tradition, he filters the ancient music through the relatively newer American forms. It’s clear he sees a potential between the two forms of music, and is determined to make it manifest.