The Free Marissa Now Mobilization Campaign is calling for a week of action from February 8-16 to draw attention to Marissa Alexander’s case and other criminalized survivors of domestic violence. Marissa Alexander is the African American mother from Jacksonville, Florida who received a 20-year sentence for firing a warning shot to stop an attack by her abusive, estranged husband. No one was harmed in the incident. The case has become a rallying point for opponents of domestic violence and mass incarceration.February 10th, the third anniversary of the day Alexander entered prison, is being marked by the launching of the Free Marissa DJ project (www.freemarissanow.org/free-marissa-dj.html). The public is invited to dedicate a song to the cause of justice for Alexander and ending domestic violence and mass incarceration. Donors can contribute at http://igg.me/at/freemarissa2, then post a link to a music video, a quote from their chosen song, or a video of themselves singing the song at facebook.com/FreeMarissaNow. Free Marissa Now hopes to raise $30,000 for Alexander’s legal fund by early March. The cost for Alexander’s new trial, scheduled for July 28, is expected to be over $250,000. 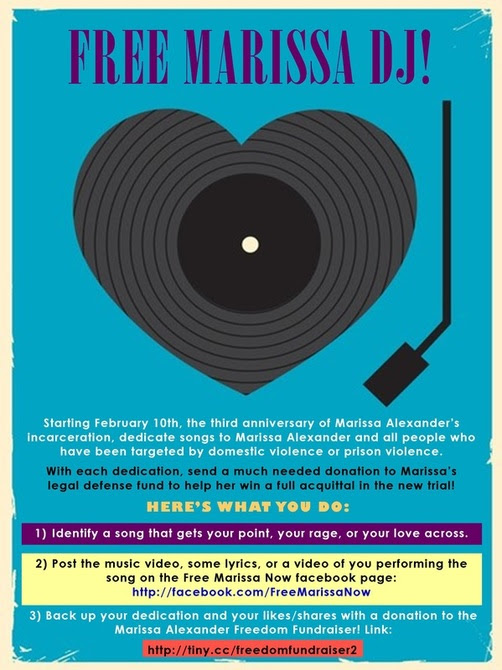