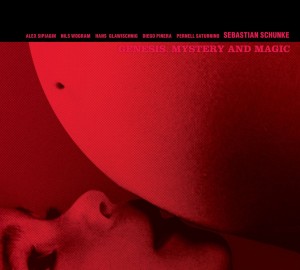 Genesis, Mystery, and Magic is the sixth album from Berlin-based pianist and composer Sebastian Schunke. Joining him on this effort are Alex Sipiagan on trumpet and flugelhorn; Nils Wogram (who I was glad to see, having much enjoyed his 2012 Septet album Complete Soul); Hans Glawischnig on bass, Diego Pinera on drums, and Pernell Saturnino on percussion.

Schunke’s compositions are rooted in Latin American jazz and rhythms, mixed with and augmented by modern European jazz and African influences. This is apparent right from the start with “Adelante,” which starts with a Latin jazz rhythm and a solo trombone, before the rest of the band kicks in, sounding like a band from a ’50s Cuban ballroom that had listened to some Mingus and decided to go further out than usual. Later, during the trumpet and trombone solos, the rhythm section showed a deft and spare touch, with Glawischnig very nimble, clean, and still organic and energetic on the bass (at one point playing a walking line so fast that it should probably be called “running”) and Pinera and Saturnino keeping the drumbeat propulsive and interesting and yet never too obtrusive.

Genesis… features a wide range of styles, feels, and moods, both throughout the album as a whole, and within some of the individual pieces. There is a quick example of the former as we transition from “Adelante” to “Song for Antje,” which starts with ethereal piano supported by arco bass and cymbals as waves, soon joined by a majestic trumpet and rolling drums. The music coalesces into a sad ballad, sounding to me perhaps like an elegy for a friend or loved one lost at sea. This is followed by the rhythmically intricate “Ella,” and then the ethereal solo piano of “Interlude 20_12.” The best examples of the latter are probably “Rapsodia No. 2 ‘Deep’” and “Misterioso” (which is not the Monk standard). “Rapsodia” starts with an odd metered rhythm and staggered instrumental interplay which made me think of a slightly more organic and looser Passages by Ravi Shankar and Philip Glass, moving into an ethereal and then out piano solo, then syncopated shifting lines followed by a free segment from which emerged interlocking trumpet and trombone lead lines. “Misterioso” starts out free and fluid, with the various instruments at times mimicking common objects (I heard sirens, industrial gears, and chains). A beat begins to establish itself, first with implied, then actual swing, before morphing into a Latin jazz rhythm. The melodic lines sound as if they are from a classic epic film, updated for today. After a well-built piano solo, the band comes back in and the epic film feel returns, but this time with a touch of Noir. Wogram plays a solo and then the band comes back in, swinging in an odd meter, and with much engaged conversation between the instruments.

Schunke plays with time, interaction, and odd meters on a number of occasions on Genesis… In “Metamorphosis,” the shifts in time and feel reminded me of some of Mingus’ compositions, while early in “Ella” Schunke and Wogram are playing together in a way that is not in obvious sync but nonetheless works quite well as a whole; this piece later features some very nice odd, off beat syncopated vamps by Schunke.

On two occasions, both titled “Interlude 20_12,” Schunke plays all by himself, ranging from high, ethereal textures to ominous, low, dark, and stormy chords and staccato lines, and leaving good space as necessary. These interludes meld seamlessly into the flow of the album.

Overall, Genesis. Mystery and Magic is a fine and ambitious work, incorporating a wide range of sometimes disparate influences, rhythms, and sounds into a coherent and organic whole. With fine individual performances by musicians who are able to maximize the sonic possibilities of their instruments and communicate well with each other, and Schunke’s talent at composition, Genesis… is an album which will take the listener to many interesting and enjoyable places, and marks Sebastian Schunke himself as a musician and composer to keep a close eye and ear on as he continues his musical journey.