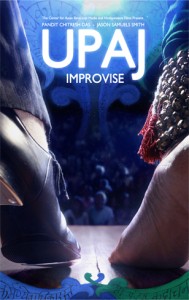 Review by Dawoud Kringle
Upaj: Improvise  begins with tap dance master Jason Samuel Smith speaking of his own struggles with having his heroes/mentors die early (Gregory Hines, etc.) He’d met Savion Glover when he was 15. He goes on to discuss his early years under Glover’s tutelage, and how after Hines’ death he realized he would have to “do it himself.” He would have to become the very thing he admired in those who came before him.

Enter Pandit Chitresh Das; world class master of Kathak dance and tabla. In 2004, Das and Smith met at the Festival of the Feet; a festival showcasing Kathak, Tap, and Flamenco dance. They recognized each other’s artistry and became immediate friends and colleagues of dance. The vast differences in culture, style, genre, and age became irrelevant and they immediately understood each other.

Collaborations and mutual sharing /teaching were inevitable.
Smith’s first trip to Mumbai was an exercise in cultural shock. The differences in culture, settings, customs, etc. were surprising enough to him. But his first performance with Das was actually at an enormous wedding. The success of the performance led to other performances.
The documentary explores the vast differences in how the two artistic traditions evolved, how they survive, and how the traditions are passed to succeeding generations. The problems each are struggling with are telling: in the US, the problem is based in industrialized poverty and racism. In India, the problem is the danger of the classical traditions becoming extinct owing to cultural colonialism, and the younger generations abandoning their own traditions for an imported tradition not their own.

Throughout, videos of dance performances are given sufficient display. The artistry of Smith, Das, and all the musicians and other dancers involved are amazing. The communication between them was marvelous; and evident of the underlying unity of all artistry regardless of style, genre, or culture.
Smith and Das found something in each other beyond mere dance artistry. They realized they were both ronins (i.e. samurai/warriors without masters, destined to continue their search for perfection alone). Smith, with his experience of losing his maestros, and Das, with the murder of his guru when he was 28.
This documentary is not only enjoyable and informative, but essential. It shows the struggle of artists to survive, to keep their art alive, and to share their gifts with the world and each other. The story is a very human one.