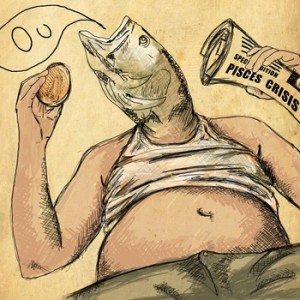 Pisces Crisis is an eclectic and energetic effort from Italian band Ou, produced by Amy Denio, known for her work in Kultur Shock and The Tiptons Sax Quartet. The band consists of three from Sardinia: Martina Fadda on lead vocals; Ersilia Prosperi on trumpet, flugelhorn, and ukulele; Sabrina Coda on alto and soprano sax; and Romans Luca Venitucci on various keyboards; Claudio Mosconi on bass, and Cristiano de Fabritiis on drums and percussion; all of the instrumentalists contribute backing vocals. Producer Denio contributes vocals and alto sax on several tracks as well; her wide vocal range and musical creativity fit right in with the band.

Like a number of recent genre-shredding records, the music on Pisces Crisis pulls a lot of diverse elements and influences into an idiosyncratic mix which make sense when put together into a coherent whole. Often, the band will jump sounds and genres within a song. A good example of this can be found on “Palle di Natale,” which starts out with a cappella vocals which sound like big band era harmonies mixed with the ethereal sounds of the Finnish folk band Loituma. Soon the band jumps in with an angular jazz interlude, and then the rhythm section locks into a funky, fusion-era jazzy rhythm in an odd meter, while the trumpet, sax, and ukulele trade leads with impossible quickness. This leads to a Sabrina Coda (what a great name for a musician!) sax solo with hints of the Balkans, then some piano accompanied vocal pyrotechnics, with out harmonies and a hip, noir sensibility, ending up with a cappella vocals: rhythmic, contrapuntal, and syllabic. “C’e’ la Crisi?” is another example, starting with a background Kalimba vamp underlying slow, descending vocals, then going into a pop/rock-style lead which sounded like a more delicate, perhaps chamber version of 1970’s vintage Queen, after which the music goes from a ’40s big band playing a soundtrack to a slightly surreal cartoon, then a slightly drunken-sounding waltz like one might hear at Honk!Fest late at night, and ends with a pulsating kalimba. “Tutti in Fila” and “Paese di Stronzi” are two other particularly notable examples of this, with the former featuring at one point an enjoyable growly conversation between Coda’s sax and Ersilia Prosperi’s trumpet.

On some occasions, Ou will even pull different influences at the same time; a good example of this can be found in “La Mentita,” which at one point features a dramatic vocal melody from Martina Fadda in Spanish over a driving crime-jazz rhythmic vamp in 5 (think Calibro 35 playing hard bop). This is also an example of the band’s affinity for odd meters; “Paese di Stronzi” provides another example of this, along with the band’s ability to create interlocking rhythms (3-3 over 2-2-2 at one point, sounding a little like some late ’70s-early ’80s Philip Glass, though with a lot more going on). Both these pieces are prime examples, too, of how well the rhythm section of Luca Venitucci, Claudio Mosconi, and Cristiano de Fabritiis can groove (with the latter along with “La Mentita” providing good examples of their ability to swing hard).

Despite all the genre-jumping, the band manages to be very tight, and shows a remarkable ability to turn on a dime without jarring the listener. This is apparent from, and quite noticeable in, the opening track, “Wok,” which starts out with an angular ragtime feel, joined by a funky marching rhythm, and then somehow segues quickly into a lyrical, ballady section (and then, unsurprisingly for Ou, proceeds to visit three or four other musical spaces). Ou‘s inter-band communication is also quite apparent in album-closer “La Stanzetta,” a gentle, dreamy number with instruments coming in and out, expressing the same melody in different ways.

Most importantly, all of the technical skill, dynamic range, knowledge of and facility in many genres of music, are used to make a very creative, engaging whole. With great songs, skillful production, excellent musicianship and communication on the part of the band members, and a dizzying array of influences, Pisces Crisis is a joyful, multidimensional romp through the Mediterranean and the Americas that will make you want to think and dance at the same time.

The 10th release by the The Tiptones Saxophone Quartet (plus drums)!!!