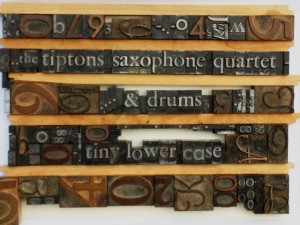 What happens when you draw inspiration from micro-big band, gospel, bluegrass, Balkan, whimsical jazz, nocturnal funk, New Orleans “second – line,” Afro-Cuban, Balkan, Klezmer and beyond? The Tiptons Saxophone Quartet & Drums! Hailing from New York, Seattle, and Eau Claire, the band has been composing and performing their music in the US and Europe since their beginnings in 1993.

After having released 10 recordings, Tiny Lower Case is a fine addition to the band’s legacy.

Peppe Voltarelli‘s suave male voice speaking in Italian introduces the Tiptons. Then, “Wave Waltz Hardcore” begins with a romping vamp with startling harmonies sets the tone for the song. The different saxes take their turns with the lead, while the others keep the mad waltz going through it’s frantic paces. The track ends abruptly on an unresolved note.

“Amara Terra Mia” (trad. arranged by Denio) begins with a sombre dirge, the quartet playing mournful lamenting harmonies. This gives way to a stoic minor key waltz with Voltarelli and Denio singing in Italian. After a sax solo, the group sings the song a cappella, and brings the song to its conclusion.

The next track, “Zoology” is more playful (in a sultry way) than the previous track. There is a more pronounced jazz feel. The solos are very “out;” and eventually, the drums let go of the role of propelling the rhythm and weave in and out of the sax solo. Eventually, the rest of the ensemble draws everyone back to the groove.

“Humans in Tiny Lower Case” is a song with weird lyrics about how silly humans are.

The entire CD is brilliantly conceived and executed. Each member of the Tiptons are clearly very accomplished and imaginative musicians. The tracks hang together well, blending from one into the other the way they blend styles and genres. There are no dull moments, no meaningless meandering on any one musical idea, and no jarring moments where extremes of contrast ruin the continuity. The later part of the CD has more vocals, with tight harmonies, and intriguing melodies.

The Tiptons Sax Quartet and Drums: an all-female saxophone quartet jumping around the world!!!

CD Review: Ou… a joyful, multidimensional romp through the Mediterranean and the Americas that will make you want to think and dance at the same time