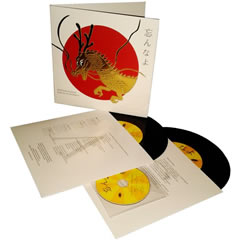 When Sohrab Saadat Ladjevardi (DooBeeDoo’s editor, publisher, and founder) handed me some CDs to review, one of them was an elaborate, ornate folder containing two vinyl 45s and a mini CD. It definitely stood out from the usual CD packaging that one sees. But, as we all know, packaging is not everything.

Thus we must listen to what lay behind the package. Washinnayo, the collaboration between the Godfather of Okinawan Pop Shoukichi Kina, and Dutch soundscape artist Pascal Plantinga promised a most interesting musical experience.

A startling ostinanto on sanshin, followed by a rough hewnvocal melody opens the first track “Kunjan Sabakui,” Kina’s stark Japanese folk song gives way to Plantinga’s electronica, and the song evolves to a rolling groove over which a sense and feel of Japan, both archaic and modern stand tall.

“Munushiri Bushi” begins with a moody bass line and some airy synth pads lurking in the background. Kina’s vocals appear in the foreground. I must confess that I do not understand the language; yet somehow one cannot fail to be moved by the sincerity and depth of meaning evident in the performance.

“Shirutuyaa Guwa” rips open with brash synth pads over which Kina cries out into the world. The track evolves into an avant-pop excursion; repletewith exotic harmonies.

Ghostly whispers and bumps in the night open the final track, “Shima Guwa.” After the haunting intro, a frightening vocal performance cuts through ominous bass and synth textures.

Kina, in addition to being a well known pop musician, is also famed for his musical activism; he sees no difference between his music and politics. Plantinga’s experience with film and TV composition, his collaborations with avant–garde artists, and his obvious devotion to Okinawan culture make his work with Kina a perfect match.

The music here is unique, and invites the listener into a place wherein a proud people strive to hold their place in the modern world, without losing the soul of their own people. This is the voice of the descendants of an almost lost people who refuse to die.