I totally agree with Ari in all the things he says in this podcast interview about how “freelancing” musicians or bands need to deal with clubs.. Actually, I’ve been advising musicians around me almost the same things. I think that the time has come that musicians and bands know how to deal with clubs. Yes, you can’t play for free anymore, as far as you’re professional and live from your music. But you have to collaborate with clubs to make a gig a success. As a musician you need to know what your responsibilities are. You need to know how clubs make business. You just can’t ask for a guaranty and expect that a crowd will show up. On the contrary, it’s very important that musicians can negotiate things with the clubs. You have to be flexible in your demands. Being a musician means to be the composer-performer and your own manager at the same time. In fact, you make yourself famous and the clubs could be a great help for you. But you need to know how to deal and work with them. 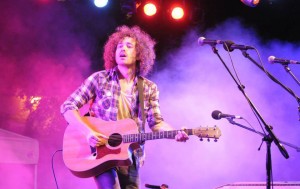 Ari Herstand is a singer/songwriter and blogger based in Los Angeles, California. Ari has played over 600 shows and writes about being an independent musician on his blog, Ari’s Take. He also regularly contributes to popular indie music news and advice sites, including our very own DIY Musician Blog.

In this episode, Ari sits down with CD Baby’s Kevin Breuner to talk about the phenomenon of “pay to play” gigs for bands. Ari recently penned an article on the subject and it garnered quite a bit of attention, not to mention a lot of interesting responses. Before you consider paying for a gig, listen to Ari’s take on this controversial practice and learn how to look out for the pitfalls and scams that can leave an unwitting band in the lurch.

Get more info about Ari and his music at http://ariherstand.com