Roulette hosted the 19th Annual Vision Festival. At their venue in Brooklyn, the excitement in the air was quite noticeable. The line up that Arts for Art put together promised to be a great event. 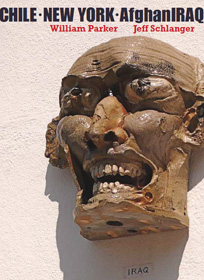 As I arrived, I caught the end of CHILE / NEW YORK / AfghanIRAQ, a film by Michael Lucio Sternbach and Zak Sherzad celebrating the work of artist Jeff Schlanger.

This was followed by the poet Steve Dalachinsky, who 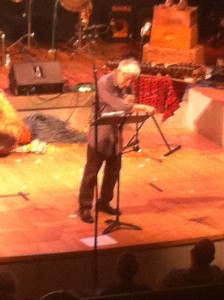 offered a piece about the jazz legacy. This was a very old school poem in both content and delivery. A passionate exposition of the spirit of jazz and the people who made it. 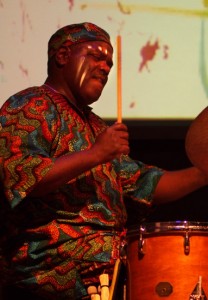 The Wimberly Harlem Ensemble The Signs & Rituals was next. This group consisted of Michael Wimberly (drums, percussion), Sabir Mateen (saxophone), Larry Roland (bass), Nioka Workman (cello), and the duo of Dyane Harvey-Salaam and Souleymane Bodolo (dance, choreography). Wimberly approached the stage from the back of the audience in a ritualistic fashion, making a rumbling windy flanged sound with two instruments. Harvey-Salaam followed him carrying a vessel of water. Bodolo followed her holding a candle. They began a dance while the musicians improvised behind them. Wimberly began a new segment with the balafon. This led to a rhythmic ostinato that allowed the dancers a more earthy foundation to build their performance upon. Roland and Workman provided an almost pizzicato counterpoint to the balafon, while Mateen’s saxophone sung its poetry over the top. Workman took centre stage with a magnificent cello solo. Wimberly responded with an excursion on the udu drum. Roland then took a poetic bass solo. The whole time, Bodolo interacted with the musicians. Wimberly then sat at the trap drums, and the band and dancers went off. The African essence of the performance was so obvious it was impossible to misinterpret; especially with the poem offered by Roland. The ceremony (for it was difficult to see it any other way) brought itself to a massive climax, and then eased into a powerful statement of redemption.

This was followed by a brief award ceremony honouring Jeff Schlanger. The artist whose work has graced many of these events, it was important to acknowledge this work, and this music. 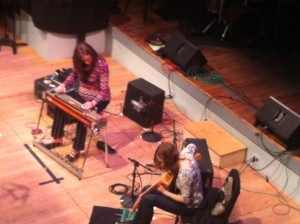 The Mary Halvorson & Susan Alcorn Duo (electric guitar and pedal steel respectively) followed. A haunting vacillation between C and Bb with subtle swells of sound began the music. Halvorson made extensive use of pitch shift effects, volume controls and live loops. Alcorn’s work was unique; her use of the steel guitar is probably unprecedented and indicative of a musical visionary. Both musicians are master improvisers, and have a brilliant sense of the dramatic and poetic. At one point, after a climax of controlled chaos, they went into a country ballad theme that continually deconstructed and reassembled itself into new configurations. Their performance explored a fascinating spectrum of possibilities. 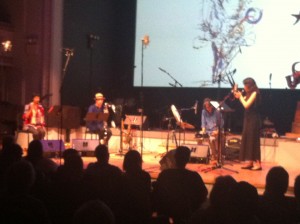 After a break, Ned Rothenberg’s Cardinal Points (Ned Rothenberg – alto saxophone, clarinet, bass clarinet, shakuhachi, Gamin – piri, taepyeongso, saenghwang, Samita Sinha – vocals, performance, and Satoshi Takeishi – percussion) took the stage.Rothenberg led the way with a blues inspired clarinet melody, which was answered by Gamin on piri. She produced an amazing spectrum of sound for such a small and simple instrument; a testimony to her mastery. Takeishi on percussion wove his thunder throughout, and Sinha‘s vocals eased in. Gamin brought out a saenghwang which she deftly adapted to this music. Yet, a very strong Korean flavor remained; especially with how Takeishi responded on the percussion. Rothenberg also skilfully played bass clarinet and shakuhachi. Sinha’s performance was especially captivating; she proved herself to be a masterful and sublime singer; delicate and subtle, with no need for displays of loud and ostentatious displays of chops. 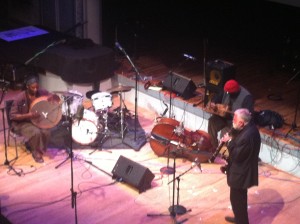 Lastly, William Parker, Hamid Drake, and Peter Brötzmann brought their artistry to the gathering. Drake began a roll on a daf while intoning a vocal chant (and mention of the recently departed Amiri Baraka and Roy Campbell). Parker began a counter invocation on the Moroccan sintir (which he did not play in the traditional manner; his right hand technique was more suitable to bass guitar – but the audience didn’t seem to mind). Brötzmann came in with a clarinet he coaxed a very North African tone from. This beginning had “East” written all over it, but the free jazz vibe was equally present. Then, while Drake and Parker drove the groove to a mad dervish dance, Brötzmann pulled out his saxophone; offering an indomitable statement (so powerful in tone that amplification was not necessary). As the groove faded, Brötzmann took over with an amazing solo flight that opened the way for Drake and Parker to return to the drums and bass respectively. After a long period of almost overwhelming intensity, the mood eased a bit. A blues mood shined out of the maelstrom they’d been riding. Brötzmann and Parker faded back and Drake’s drum solo dominated the gathering. It was both lyrical, and at the same time a frightening force of nature. When Brötzmann and Parker returned, their offering was more poetic and understated; but no less intense and inventive. Parker also interspersed modes from a shakuhachi – while still playing the bass (I spoke to him briefly after the show. He joked about how this was no easy feat!) Their mastery of what could easily have descended into meaningless chaos, and shaping it into a coherent and meaningful musical statement was astonishing. The fact of their virtuosity was proven, easily, with every note they played.

It must be noted that throughout the night, there were a lot of references to the recently departed Amiri Baraka and Roy Campbell. Their legacy remains strong and their absence is quite noticeable. It will be a long time before we will see their like again.

This second day of the Vision Festival was a successful and beautiful event. Kudos to the musicians and organizers!

Vision Festival 18 Report P.2: The Evening of the Final Day