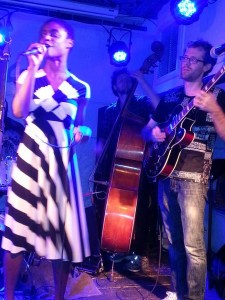 It was a warm spring night in Harlem when Silvana hosted the CD release party of songwriter and jazz vocal stylist Kosi‘s (a.k.a. Kosi Gyebi Sorensen) newest recording Pictures of Us. The show was webcasted through concertwindow.com (and got good reviews).

Those who are familiar with Kosi will immediately know that this show, and the CD itself, was a departure from her earlier efforts. In the past, she’d had only a guitarist as a back up (on both stage and in the studio). This night, the band (Aron Marchak, guitar, Angelisha “The Trumpetess” Rodgers, trumpet, Brendon Biagi, saxophone, Dan Saulpaugh, guitar and vocals, Julian Smith, bass, and Isaiah Pierce, drums. On the CD, the only exception to this line up was Jonathan Rooke vocals) shared the stage with her. It was interesting to see how she presented herself in this context, as opposed to the stripped down setting she was known for and comfortable with.

They began their set with a lively and exotic take on the classic ”Caravan.” Brendon and Angelisha took interesting solos, and Kosi brought her own unique vibe to the song. This was followed by the classic “God Bless the Child.” In keeping with the song’s essence, the band played low key, and made plenty of room for Kosi’s impassioned vocals. She was clearly in charge.

After this seeming warm up, they played an original; “I Already Knew.” A fascinating drum intro focusing on the cymbals set up a midtempo groove. Here, the true nature of Kosi’s essence of a singer and songwriter emerged.

They followed this with “Wild is the Wind.” This song, once the domain of Nina Simone, Kosi made her own. 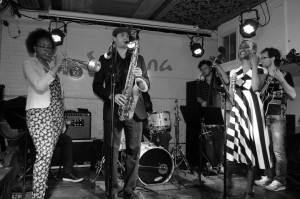 After the group went once again into familiar territory with a playful and at the same time sultry version of “Satin Doll,” they segued into the new CD’s title track “Pictures of Us.” A brief and very interesting drum solo set up a lively and infectious 5/4 groove. The powerful vocal line had a very memorable and authoritative quality, and allowed for some very fascinating possibilities for the solos. Aron’s solo was particularly inventive. After the vocals returned with the final verse, the song shifted seamlessly into a 6/8 groove; a wonderful contrast.

After a brief break, they began their second set with “Corcovado.” This was followed by a new interpretation of one of Kosi’s originals from her first CD One More Cup of Coffee.

“Brianna.” The song is, in its original form, extraordinarily beautiful. It was interesting to hear it in an unprecedented setting. Each musician offered their own interpretation; and Julian’s bass solo was quite inspired, taking the song in an interesting direction.

Another original, “Once and Future” (also form Kosi’s first CD) was next. This song is a blues, not so much in musical style and form, but in mood and essence. Kosi’s vocals led and dominated the unfolding of the song.

After this, Kosi took the reigns off the band, and called for “Footprints.” The band took off like a herd of horses let out of the stable, and allowed to run free. Angelisha’s solo was particularly good. Isaiah and Julian took all kinds of liberties with the groove, shifting styles several times. It was all very good fun. Isaiah’s drum solo was marvelous. It had a quality of subliminally implying the melody (as I’ve heard other great drummers, such as Idries Muhammad do). 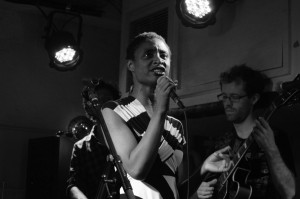 They continued with another original from the new CD, “Valerie.” Again, Kosi’s voice was presented in an ensemble that contrasted earlier performances wherein, with a single guitar as backup. Normally, her vocal would be thrown into raw, sharp relief; but here, the interaction between the musicians provided an interesting contrast. It was also a challenge to the musicians: they must keep the essence of the song without sacrificing their own unique contributions. And they did. Yet, throughout, Kosi was never lost in the music; her voice carried the essence of the song clearly. This is perhaps Kosi’s greatest strength; her ability to make the listener feel the emotional content of the song. This is something beyond mere chops (which she certainly has). This is in the realm of an invocation; the listener responding on a visceral level and experiencing the story as if firsthand.

The second set concluded with “Hoboken Blues” (another original from the new CD). As the title suggests, this was done in the tradition of a low-down, dirty, two-fisted, gut bucket blues. Everyone had a chance to strut their stuff; and Kosi’s powerful voice belted out the blues as indomitably as the best blues singer you’d ever want to hear (it’s almost incongruous to hear this powerhouse voice coming from such a physically small woman; like opening a small vial and watching a hurricane emerge). This blues was the perfect way to end the two sets!

The whole performance was a fine way to kick off the new CD.

Concert Review: Kosi… does not merely sing; she becomes the song