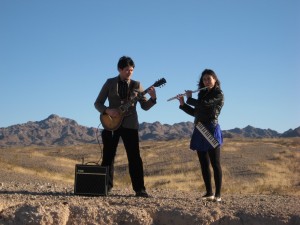 Touring is hard. There’s no way around that. When a band that plays music that is not easily categorized, they are taking a big risk. This requires courage and an absolutely unshakable confidence in what one is doing. With that in mind, I was curious to hear what band Grex (self described as a progressive rock / free form band) was all about, I was.

Hailing from Oakland (CA) Grex is Karl A. D. Evangelista (guitar/vocals), Rei Scampvia Evangelista (keys/vocals), and Robert Lopez (drums). To quote their bio, “In biological terms, a “grex” is an organism composed of several smaller cells. Grex (the band) was formed as a way to explore the meeting point between popular song and experimental jazz, fostering a new music that both encompasses and expands upon its influences.“ They had performed with Fred Frith and his band Cosa Brava, Kronos Quartet, Tony Levin, Eddie Gale (Sun Ra, Cecil Taylor), and others, and have performed in many prestigious venues on the west coast, Pennsylvania, and Washington DC. Their performance at Spectrum was the last date on their east coast tour.

However, I arrived at the venue early. Nathan Hook’s band Mobiustrip played before Grex. Their music was an excursion into classic fusion. The drums and bass propelled the colorful harmonies and imaginative solos beautifully. The soloists always played in service to the song, and were never self indulgent or excessive. And the communication between the musicians was efficient and easy. Definitely worth checking out.

After a break and gear change, Grex, took the stage. From the first notes, it was obvious this was going to be a contrast to the previous band. They began with unison vocal / instrumental in an abstract, free form stream of consciousness, rather like cornflakes in zero-G. This coalesced into a rock progression in a jagged 5/4, and ended as it had begun.

They continued with a Zappa-esque song that was introduced as a Christmas song (!) Scampvia ‘s lead vocals had a subdued quality. Her keyboard work is very good; and like her voice, having a subdued quality, even when the songs move into an energetic mode. Evangelista’s work on guitar was fascinating, moving from melodic and “in” to the most “out” and producing a surprising variety of effects and subtle nuances. Throughout the performance, Lopez’ drumming held things together nicely. His work was precise and always exactly what was needed to bring the best out of the others.

This was followed by a Don Cherry piece called “Guinea.” They attacked the song with the passion and energy that the song deserves. The next song was dedicated to Mal Waldron. Scampavia began with a statement on the keyboard, respectful of the composer’s intent. The group joined in, and after a delicate presence (almost a surreal lullaby), a heavy metal like interlude abruptly smashed its way through the dreamy vibe. At times the structure would dissolve into chaos, and then reassemble itself.

Next was an original “Stump Fuckers.” It began as a rock-ish song, and would indulge in the abrupt gear-shifting through a variety of moods and textures the band’s performance had so far caused the audience to expect.

“Little Wicka, Big Feet” was the final song. The piano played a stately intro that somehow became a playful romp into abstract chaos that morphed into a stately almost Latin groove before self destructing into an avant-metal fistfight, and evaporating into a smoky, free form tango. The tango solidified and then began a torrid, forbidden love affair with heavy metal power chords, and ended where it began.

Grex is a fascinating band. One of those groups of musicians who have decided to ignore the boundaries between genres and take matters entirely into their own hand. And the results are marvelous.