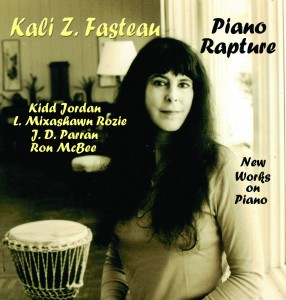 Kali Z. Fasteau is an accomplished composer and multi-instrumentalist, having traveled all over the world learning and playing various woodwind and string instruments and absorbing the music of the many places she has lived and created. On Piano Rapture, she returns to her first instrument, presenting nearly an hour of spontaneous compositions for both solo piano and small ensemble. Her collaborators on this project include reed players Kidd Jordan, L. Mixashawn Rozie, and J.D. Parran; and percussionist Ron McBee.

The album starts with “Another Southpaw,” a solo piano piece that begins with stormy motion, up and down the entire keyboard, and then morphs into ominous and dramatic out chords. Right away, Kali Z shows here ability to use the full range of the keyboard, pitch, dynamics, and mood, generating turmoil in the low notes and adding tension up high. Later in the program, another solo piece entitled “Attuned” brings back memories of “Southpaw,” albeit with important differences in the details. “Attuned” creates a feeling of waves, stormy waves, with often complicated and ever-shifting rhythms interspersed with stop-and-start bursts of notes. The third solo piece, “Hai Tchicai,” at times brings to mind late romantic and Impressionistic music, alternating with what can best be described as a fuzzy rhythmic section, perhaps the aural equivalent of a photograph that has been deliberately made slightly out of focus, to good effect. Each time Kali Z switches from one feel to the other, it’s slightly different, as if the part being played has absorbed a little bit of the other, and at one point, I was reminded of Coltrane’s “Alabama.”

The small ensemble pieces on Piano Rapture show a group of musicians who complement each other very well. On “Faun Listening,” Kidd Jordan‘s tenor comes in after an almost Twilight Zone-esque piano introduction, complementing Kali Z with a second stream of relevant information, getting very active while Fasteau’s low piano move everything along quite energetically. Mixashawn Rozie joins Kali Z on tenor for “Mix Flies,” a composition with a mid-’60s Coltrane feel, free conscious, inspired, and soulful, outside but not too far. Fasteau’s piano excellently complements and supports Rozie, responding to tenor calls with complex yet not too obtrusive lines. “Mix Flies” is an excellent example of the near-telepathic speed of the communication between the musicians on this album, and their motion as a unit, a neat trick when spontaneously composing.

That mid-’60s Coltrane vibe can also be heard on “Body Wisdom,” which features Rozie on soprano. The piece begins with simple long tones, goes into a stop-and-start riff with spare sax lines above (Rozie has a noticeably good strong tone, and here is one of the best examples). This builds into a very rhythmic section, but with some interesting quirks, and then Rozie takes a solo alternating between long, lyrical, out lines, and rapid-fire bursts of notes. A free duo section follows, with excellent communication between the two musicians. “Roy’s Wake,” a duo with Kali Z on organ and Rozie on flute and soprano, has a weird, spacey, almost Sun Ra meets 2001: A Space Odyssey feel, with some eerie vocals and slow motion long note interplay between the various sounds. At one point, I was reminded of some of Frank Zappa’s Varese-inspired classical compositions. The modern/20th Century classical influence continues on “Etherea,” sounding at times Impressionistic, and at other times like a ’60s loft concert, with Rozie’s flute and Kali Z’s piano intertwining on busy runs, with the flute almost butterfly – or hummingbird-like in its motion.

Piano Rapture succeeds at the neat trick of being technically interesting, spontaneous, and emotionally gripping all at once. Kali Z’s many influences show, but especially those from the free, spiritual Coltrane-influenced music of the mid-’60s, and from the early 20th Century’s forward-thinking classical composers. With a fine set of supporting musicians, Piano Rapture will likely be highly enjoyable to fans of high-level, spontaneously composed music