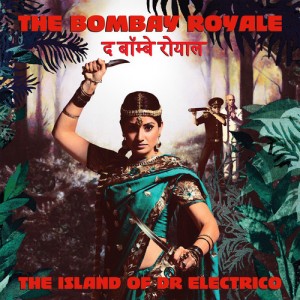 Formed in Melbourne, Australia in 2010 by musical director and saxophonist Andy Williamson, The Bombay Royale is an 11-piece Australian band fronted by singers Parvyn Kaur Singh and Shourov Bhattacharya. Taking soundtracks of 1960’s and 1970’s Bollywood movies as their main source of inspiration, their music synthesizes Indian classical and folk music with Western styles such as surf, rock and disco. In their beginning, they played covers of popular Hindi songs from the 60s and 70s. They have since composed and performed original music.

The personnel on the CD reads like the cast of an old spy movie. Vocalist Parvyn Kaur Singh (as the Mysterious Lady), vocalist Shourov Bhattacharya (as The Tiger), saxophonist Andy Williamson (as The Skipper), trumpeter Declan Jones (as Dr. Electro), trumpeter Edward Fairlie (as Chip Chase), trombonist Rosalind Jones (as the Kung Fu Dentist), keyboardist Matty Vehl (as the Bandit Priest), guitarist Tom Martin (as the Railways Mogul), drummer Julian Goyma (as the Leaping Shaman), and sitarist / tabla / dilruba / mandolinist Josh Bennett (as the Jewel Thief). There are guest appearances by all manner of musicians / characters; none of which is explained anywhere I’ve been able to find (perhaps the lyrics hold the answer to this mystery. However, being as they are in Hindi, this puts me to a personal disadvantage. Even the few examples of English lyrics, such as in “Give Me Back My Bunty Bunty” are obvious references to things beyond my knowledge and experience. As of this writing, I have failed to learn what a Bunty Bunty is. But the song is nonetheless, truly engaging and fascinating. Clearly these guys and girls take their movies very seriously, yet not without a sense of humor.

The first track of the CD, “Ankhiyan,” begins with a metallic guitar riff that is accentuated by rock drums, bass and synthesizer. The vocals are the type of call and response between male and female singers that is de rigueur in Bollywood. Yet the track also has a noticeable Arabic feel, as well as the flavourings of the western popular styles that inspired them.

As the CD progresses, the influence of 70’s movie soundtracks becomes more obvious. For example, this is evident in “Wild Stallion Mountain,” which, with the exception of the Indian vocals, seems perfectly suited for the type of vintage films Quentin Tarantino loves so dearly,

While the music never deviates from the genre of 70s movie soundtracks / retro pop / surf / spy music, there is a surprising variety of moods and textures to be found in the music. The whole CD is well written, produced, and performed. There is not a bad song anywhere on the CD; and never once does the music fail to execute its intention with skill, finesses, and style. If this genre is your taste, you would be hard pressed to find better quality. The whole CD is a musical romp through the mythology of cinema music born of the blending of eastern and western subcultures engaged in a shadowy, torrid love affair in some bachelor pad surrounded by black light posters, lava lamps, leopard print bed sheets, and incense burners bearing the likeness of Buddha and Ganesh.