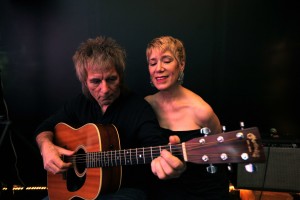 On Wednesday, October 1st, the first real chill of autumn filled the Brooklyn night was swept up with the sound of a Rumi-esque poem leading the way into a serene flowing song. The vocals ecstatically glided through the crystalline guitar harmonies and sitar melodies.

Paula Jeanine Bennett is a frequent performer in Mumbai, as well as the US. She blends elements of ghazal, thumri and raga in a Brooklyn frame. The songs of Melody Sky reflect the pulse of modern American life infused with North Indian modes and embellishments.

The group’s next offering was preambled by a brief monologue about winter’s poet trial for healing. This had a more contemplative feel than the opening song. Bennet’s vocals took on a slightly more earthy feel, without loosing the ethereal quality that forms the foundation of her approach.

She spoke of her thumri lineage; and introduced the next song as an acknowledgement of “the first kiss of autumn” and the lyrics being about a woman waiting for her beloved. The guitar and sitar began a harmonic drone with the percussion becoming more insistent there were some interesting harmonic surprises and contrasts from the guitar that eloquently underscored the essence of the vocals and lyrics.

Murghai sat out on the next song. Bennet sang a line from an ancient Persian poem that asked the heart what remedy it required. A quiet guitar accompaniment formed the background for this starkly intimate self-introspection. The percussion eased in and allowed the guitar some freedom; and a little chordal adventurousness reared its head. But the vocals still held dominion over the music.

Percussionist Kevin Sport was invited to join the group. A lively guitar figure in a minor key set the stage for a song about a ghost who would visit a woman at night. This song was an interesting departure from – or more specifically, a variation on – the spiritual and amorous vibe of the previous offerings. The song was fast, lively, and had the audience all but dancing to the intense rhythm. Bennett was at her most animated.

Murghai was invited back to the stage. They went into a song inspired by Jimi Hendrix. The Hendrix vibe was most clearly heard in the guitar (with Murghai briefly quoting “Third Stone From the Sun” – about which we later shared a joke. But that’s a story for another day). As the song progressed, Bennett took up a frame drum and brought the serene song to an emotional climax that this time succeeded in getting people dancing.

The set ended on this high note.