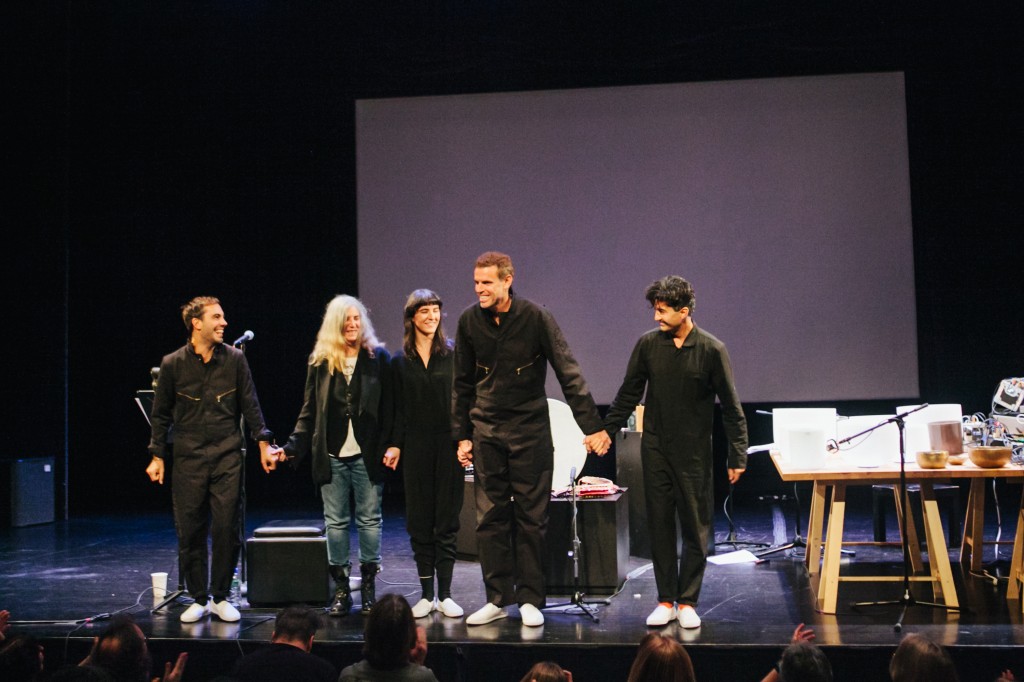 I was lucky enough to catch a one night only performance of Killer Road a hypnotic meditation on the idea of perpetual motion and the cycle of life and death. The live performance featured Patti Smith reciting poetry written by Nico, with daughter Jesse Paris Smith, Soundwalk Collective, and a visual installation by Blake Carrington.

We begin with a walk through the woods, crunching leaves as percussion and Patti rubbing her hands together like a praying mantis. The stage looks like a workshop; wooden sawhorses provide legs for a makeshift table filled with brass and quartz Tibetan singing bowls and various electronics (laptop computer, mixing boards, loop stations, etc.). Stage right – Patti Smith, center stage – a projection (shot in first person) of a stroll through forest, stage left – everyone else. I’m used to attending performances that are music supported by visuals or vice versa but rarely see a show in which both are an equal and essential force. I found the staging to be perfect for showcasing the audio, visual, and overall theatric performance, giving each piece of the puzzle room to grow and evolve contributing to the overall theme and keeping your mind completely immersed in the performance.

I am not a stranger to Patti Smith’s hypnotic stage presence or even her visual art, both of which I experienced in Detroit, her previous home where she spent years raising her family with husband Fred “Sonic” Smith. I am also familiar with Nico’s unique voice and the story of her life and death as a disappointing and familiar tale of many in her generation. Heading to Killer Road, I expected to be reminded of the casualties of the New York art and music scene of the 1960’s, mourning an artist with an untimely death. What I experienced, however, was not a funeral nor even a tribute, but a dynamic and invigorating performance that felt like a purgatorial line between reality and the afterlife, forcing me to see death not just an event but as a journey. 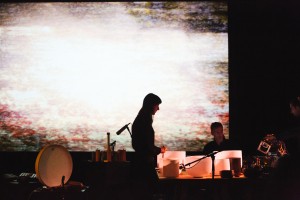 The soundscape was created and performed by Soundwalk Collective (Stephan Crasneanscki, Simone Merli, and Kamran Sadeghi), an international art collective based in Berlin and New York City, with them Jesse Paris Smith. The combined audio can be described as atonal weaving field recordings, with live digital and acoustic sounds, instruments including a bodhrán (traditional Irish drum), an ocean harp (metallic bowed instrument filled with water), and several small hand-crank music boxes.

A massive projection of Ibiza, Spain (the place where Nico had a fatal heart attack while riding her bike) dominated the stage in size but the suggestive and subtle nature of the 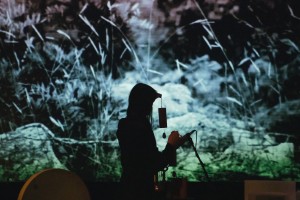 footage made it a nice fit with the dynamic of the overall performance. The footage provides the perspective as if the viewer is cycling through the countryside and often featured a beautiful woman (representative of Nico) with a scarf obscuring her face and on one occasion swimming nude. There is a second layer of spectral waveforms reacting to the music in real time, giving me the impression that the woman on the screen and the viewer were seeing/in a world between the afterlife and reality. 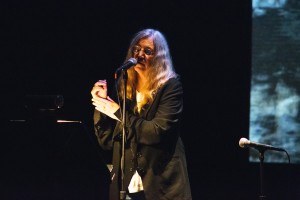 together the essential elements of the show. Smith used her artistic license with Nico’s poetry: repeating for emphasis, breaking into a shaman-like chant, even breaking the fourth wall and commenting on the content of the poetry to the audience. For example, when reciting some of the more intense poetry Smith would come in with much needed comic relief. From the poem “Facing the Wind” Smith repeated “My mother and brother are facing the wind, why am I not facing the wind?” she stopped and said, “I don’t know, it doesn’t say here.”

Towards the end, the soundscape in contrast to the rest of the show became melodic, the sound building, gaining a sickening dissonance and release into a conversation in Spanish between a man and a woman with a dog barking in the background. For the finale, Patti Smith sat down facing away from the audience, and continued until all the stage gradually fell silent.

Killer Road was consistently entertaining on many levels and although I rarely leave a performance dealing with the subject of mortality feeling inspired, I took away a feeling that we can defeat death only by leaving something behind for others to enjoy.