HarmoNYom in collaboration with Robert Browning Associates kicked off its Women’s Voices Festival at St. Peter’s Church with the New York debut of London based sitarist Roopa Panesar.

Panesar began training at the age of seven under sitar maestro Ustad Dharambir Singh. She also studied under Pandit Arvind Parikh, Ustad Shahid Parvez, Ustad Bahauddin Dagar, Ustad Siraj Khan and Pt. Ajoy Chakroborty. As well as being deeply rooted in the classical tradition, Roopa has collaborated with musicians from different genres such as Talvin Singh, Laura Wright and Dirk Brosse to name a few. Roopa has toured extensively in the UK, Europe and USA, and released her debut album Khoj in 2011. She also teaches the sitar, and is involved in numerous projects to inspire and educate the next generation of Indian classical musicians.

After a fascinating discussion wherein Prof. Yogi Trivedi (adjunct professor in the Graduate School of Journalism and a doctoral student in the Department of Religion at Columbia University) presented the audience with a discussion concerning the religious and aesthetic nature of North Indian poetry and music, and of the historical role of women in Indian music, Panesar, accompanied by tabla player Gurdain Rayatt, were introduced and they took the stage.

Panesar set up the tambura on her iPhone, carefully selected a mizrab, and did some last minute tuning. After thanking the audience and HarmoNYom, and mentioning that this was their first time in New York, she began an alap on Rag Jog, a deep and meditative raga.

She began by playing melodies on the tarb (resonating strings). This seemed indicative of a statement of independence: while this is not an unusual technique for sitarists, the fact that she opened the music with this let the audience know that she clearly had her own statement to make. 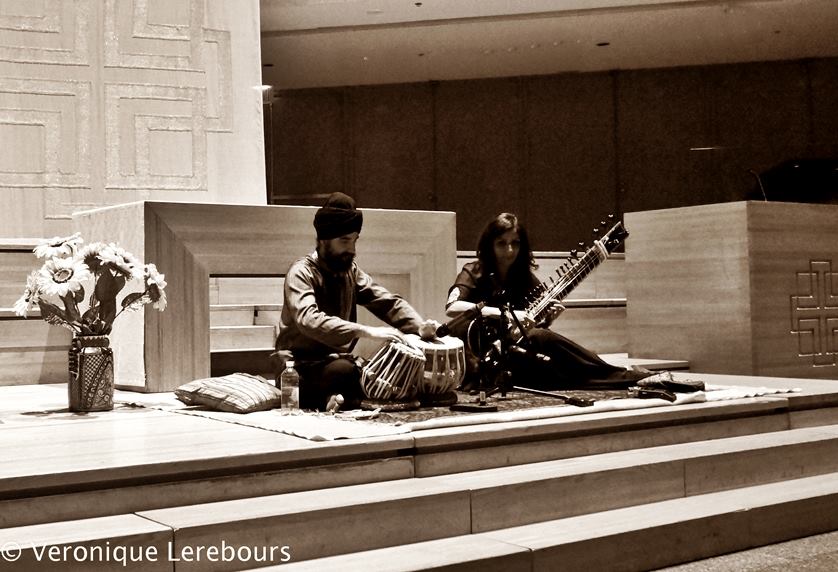 It was clear with the beginning of the alap that, while her technique was very together, her primary focus was in the musical and poetic essence of the raga. She explored each nuance of Jog with a contemplative deliberation; like a jeweler examining a collection of diamonds, and in doing so, allowed the audience to experience each melody with a delightful intimacy. Her use of the komal ga (minor third) in the predominantly “major key” raga added a perfectly contrasting color to the spectrum without upsetting the balance of the raga.

After bringing it to a climax, she and Rayatt began the jor in teental (16 beat cycle). Here, she invoked a different aspect of the raga. It became more demonstrative within the rhythmic context. They did some interesting things with the tempo; occasionally implying a 6/8 feel that insinuated but never actuated a change in tempo. This was a little incongruous because while Panesar was playing with a very serious attitude, much of what they played evoked smiles, sighs and gasps of astonishment and approval, and a general delight.

In fact, in the audience there were a small group of senior musicians, (whom I had the honor of sitting next to). Panesar would occasionally glance at them, as if concerned about their approval. I can bear witness they thought very highly of what the two younger musicians were playing.

After the raga was brought to a gentle close, Panesar spent a little time adjusting her tuning for a new raga.

They began a composition in Yaman Kalyan. Panesar played this with a very liquid quality, more immersed in longing rather than the contemplative mood of the previous raga. When the second part began, the longing became a demanding. As they moved into the jhalla, the two musicians played some astonishing feats. It ended on a beautiful and intricate teehai.

During the performance, some very noticeable echo was coming back at them from the acoustics of the room. This was disturbing to them; and rightly so. Acoustic artifacts like this can distract from the music and alter its mood (an occupational hazard for all musicians: although the two musicians handled this difficulty well). After some brief conference, it was decided to bring the level down (which seemed to do the trick). Thus, with minimal amplification, they began a composition in Mishra Kofi.

Panesar approached the alap in a very serious manner, it was as if the audience were privy to an intimate and private conversation; or perhaps a lover’s quarrel. It was almost painful in its beauty. As with the previous piece, they explored all possible nuances, and brought the music to a wonderful teehai climax.

Rayatt is a marvelous tabla player. He started learning tabla from his father, Ustad Harkirat Singh Rayatt (senior-most disciple of Bhai Gurmit Singh Virdee) at the age of three and also from his grandfather Bhai Gurmit Singh Virdee. He’d also learned from Pandit Suresh Talwalkar, Pandit Kumar Bose, Pandit Anindo Chatterjee, Pandit Swapan Chaudhuri, and others. He has been a member of Chakardar, Sam-Yo!, Chandayan TriDhaa, and has performed extensively in various locations around the UK for solos and sitar/sarod/sarangi and vocal accompaniment. He performed a tabla solo in December 2007 at the Harballabh Music Festival in Jalandhar, Punjab, performed solo for the Leeds International Music Festival, at the Darbar Festival in 2011 and in the presence of HRH The Prince of Wales in London at the V & A Museum and at the Royal Albert Hall. He is also an accomplished teacher. His command of the tabla was obvious, and he easily navigated some impressive and beautiful possibilities in the rhythm. He and Panesar communicated very easily.

CD Review: The Bombay Royale… a musical romp through the mythology of cinema music born of the blending of eastern and western subcultures

Concert Review: Akshara – has proven themselves to be master musicians, whose work is exemplary of beauty and sublimity.

Panesar is a highly skilled sitarist. There is no question of her technical master. But it’s clear this serves the soul and essence of the music. Her approach to sitar has what Bruce Lee once described as “emotional content.” It’s clear that what she does with her instrument has real poetic and artistic depth and meaning.

Thus, HarmoNYom’s Women’s Voices Festival began brilliantly. The performance – indeed, the whole festival – begs the question of gender roles. Differences in gender are obvious, as the whole universe has its duality of masculine and feminine. But (and this is a personal opinion) it is indicative of a defect of our civilization where brilliant and talented women like Panesar must endure the stigma of gender as if this were something handicapping her artistry. To be clear, she is an amazing musician by any standards; a truly civilized society would cherish her kind. Veronique Lereboures and HarmoNYom, in putting this festival together, have diagnosed this malady, and struck a blow against it. Perhaps it’s me, but it somehow seems that the very existence of a music festival that needs to specialize in women in music may actually be (at least partly) the result of, and response to, this misogyny.