Counting to Seven is a new large scale work written by Tom Johnson for the Dedalus Ensemble. Seven voices count to seven in about 30 different languages from all over the world. Each piece explores a way of counting as well as a language sonority giving birth to a new musical form. From Okinawa (dialect from Japan) whispering words to Malinke (Africa) rhythmic patterns with additional small percussions, each continent is represented. Counting to Seven received the support from the French Institute, French Government (DRAC), Région Languedoc-Roussillon and SPEDIDAM.

Created in 1996, DEDALUS Ensemble is a contemporary experimental music ensemble based in Montpellier, France. Their repertoire gives a large place to flexible scores from across the United States and European New Music from the 1960′s to today. DEDALUS is a collective where every musician collaborate to orchestration and interpretation. DEDALUS is a leading ensemble in France and performs extensively in festivals and concert series across France and Europe. A noted champion of contemporary American experimental music, the Ensemble has premiered works by Tom Johnson, Christian Wolff, Alvin Lucier, Phill Niblock, Frederic Rzewski, James Tenney before French audiences.

Mark Rogers and Mary Byrne call New York City home these days, but the pair cut their musical teeth in Georgia—Rogers with new-folk standouts Myssouri and Byrne with eclectic rockers Hot Young Priest. The album Rogers and Byrne have just crafted as a duo, I Line My Days Along Your Weight, should establish the pair as one of the most vital acts in folk music right now.

Recorded in Brooklyn and set for release next Tuesday, Oct. 14 via Important, I Line My Days Along Your Weight is a striking set of sparse, evocative tunes filled with rich instrumentation—”baritone acoustic, tricone resonator, golden-­era flat top, space-­age lap steel guitar, upright piano and hundred-­year-­old mandolin,” per the press release—that is unassuming even as it devastates…Read more here: http://flagpole.com/blogs/homedrone/posts/flagpole-premieres-mark-rogers-mary-byrne-em-i-line-my-days-along-your-weight-em

3.  #IRespectMusic…AND I VOTE! A Night of Celebration and Action

With royalty reform now sweeping Washington, join us to raise a glass and raise our voices together in support of music makers and music lovers everywhere. Our leaders are listening, let’s make sure they hear us at this event, and at the ballot box on election day!

With performances and appearances by:

City of the Sun
http://wearecityofthesun.com/

Coyle Girelli (of The Chevin)
http://the-chevin.com/

Join bassist Sam Minaie’s Heyo! for a night of post Ornette improvised jazz – rock. Featuring compositions from their recent release under the same name, Heyo!, will be an evening of exciting music and Minaie is backed by an extraordinary band including Shane Endsley on trumpet, Mitch Marcus on saxophone, and Nate Wood on drums.

Chop & Quench (the Fela! Band), “The Fela! Band”, is comprised of members of the cast and band of FELA! the musical. Individually, the musicians are some of the finest in New York, having performed with The Roots, India Arie, Elvis Costello, and many others. Lead singer Sahr Ngaujah was nominated for a TONY Award for his performance in the Broadway show and has been featured on film and television. As a unit, the band has gotten to accompany performers such as Beyonce, Femi Kuti, and Angelique Kidjo. Known for their straightforward performances of classic Fela Kuti compositions, they have branched out, bringing their own original music to the stage. After performing around the world, they recently performed at the Sundance Film Festival in conjunction with the premier of Alex Gibney’s film “Finding Fela”. They are now back home in New York preparing new material to take into the studio for their first recording since the Fela! Broadway cast recording, and looking forward to starting a weekly Monday night residency at the Knitting Factory in Brooklyn.

?uestlove is the unmistakable heartbeat of The Roots, Philadelphia’s most influential hip-hop band. Beyond that, this Grammy award-winning musician’s undisputable reputation has landed him musical directing positions with everyone from D’Angelo to Eminem to Jay-Z. He boasts production credits for Al Green, Erykah Badu, Joss Stone, Justin Timberlake and D’Angelo, among many others. His uncanny ear for picking the perfect song for the perfect moment landed him the position of musical director of The Dave Chapelle Show. His beloved Roots crew serves as house band for the all-newTonight Show with Jimmy Fallon. And now, ?uestlove is an author. His memoir, “Mo Meta Blues” hit bookshelves in June 2013 with his follow-up publication “Soul Train: The Music, Dance and Style of a Generation” debuting in October 2013.

Sadhana of Sound & Listening: Absorption in Indian Classical Melodies
with Eric Fraser on the bansuri (bamboo) flute and Ehren Hanson on tabla.

Join Eric Fraser (bansuri) and Ehren Hanson (tabla) for a captivating sound meditation in the form of an Indian Classical music concert. Eric will present raga music in a traditional format: improvising within the structure of ancient melodic formulas to invoke particular subtleties of mind and emotion, contained within and supported by trance-inducing rhythm cycles performed on tabla by Ehren Hanson.

In a brief lecture before the concert, Eric will share about his experience as an official disciple of Pandit Gopal Roy, acclaimed flute player of a cherished, rare, and particularly contemplative musical gharana (lineage) of West Bengal. For over a decade Eric has studied with his Guruji in a traditional “gurukshisha” style: an intimate guru-disciple relationship that allows for the most potent transmission of musical teachings and the treasured nuances of the lineage.

The sadhana (rich, heartfelt practice) of this music can extend beyond the deep meditation of the artist to you as the audience. As a listener, you can engage in a sadhana of deep listening. The melodies and rhythm cycles of the Indian Classical format offer the active listener pathways into inner landscape of emotion and consciousness. The music tells stories, teaches, inspires and transports, and develops gradually, building slowly to ecstatic realms. Listen to Eric Fraser online at http://www.ericfraser.com/

7. Richard Barone‘s “A Circle of Songs“

A Circle of Songs is a monthly, live artistic talk show series curated and hosted by acclaimed triple threat performer/producer/author Richard Barone. Each show is wholly unique in the guests, performances, and topics of conversation.
Join Richard as he welcomes friends, colleagues, idols, and some of the brightest stars in showbiz to the intimate setting on SubCulture’s stage.

Milk River in association with True Groove Global SOUL presents a weekly Global Soul Celebration. Kicking off this collaboration will be the Tomas Doncker BAND in an evening of blues, funk, afro-beat featuring special guests. Tonight is the celebration of the release of Funky World a True Groove Club/Dub/Dance Compilation. NO COVER NO MINIMUM (but please support Milk River as you can) 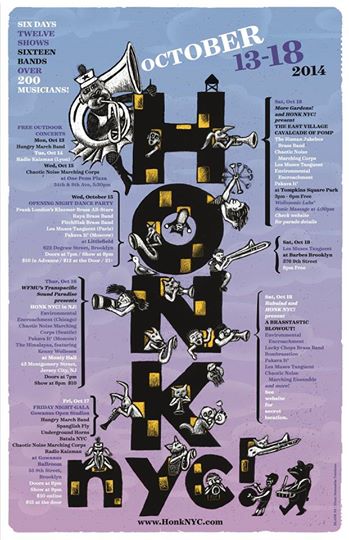 For over 25 years, Universal Temple of the Arts (UTA) has presented Staten Island JAZZ to critical acclaim and loyal audiences. UTA has long embraced Jazz – an American-born music genre – and founded Staten Island JAZZ in 1988 with the intent of both preserving and promoting Jazz arts. UTA has consistently delivered an extraordinary show with legendary artists.  Past performers have included The Sun Ra Intergalactic Arkestra, Kenny Barron, Reggie Workman, Barry Harris, Bluiett, and more!

HarmoNYom in collaboration with Robert Browning Associates, is presenting the WOMEN’S VOICES FESTIVAL at Saint Peter’s Church in New York City on October, 10, 17 and 24, 2014. This is the first Women Festival ever presented in New York!

With I Am King Ladell McLin offers us an important lesson: Blues Rock is both authentic and current, an album and an artist to discover immediately.

The original style of Ladell McLin reveals perfectly assimilated influences that bring us sometimes without the plagiarize, accents Stevie RAY VAUGHAN, CHILLI PEPPERS RED HOT, LED ZEPPELIN, HENDRIX, VELVET UNDERGROUND, or … well, this guy has it all including his Blues remains pure, not because it locks him in immutable patterns but because he saw him and let him express himself through it, unencumbered by unnecessary labels.

“Being true to who we are is the largest factor in the creation of our sound,” says Iz Stone lead singer and guitarist of the all original Nashville TN rock band The Grayces. The Grayces have an interesting mix of genre pushing high-energy rock with a tinge of something dark lurking just behind the curtain. “The Grayces with an enticing and distinct sound have a way of inducing your head to move involuntarily,” says Jamie McCormick of Brite Revolution. With fellow members Chas Cantrell (drums) and Patrick Ward (bass) The Grayces are gearing up for what will be their 2nd full-length album release titled ‘Westing’ due to be out October 14th 2014. Until the official release you can hear them debut new songs at their live shows.

Bassist/composer Ben Allison is one of a few band leaders working in jazz today who has developed his own instantly identifiable sound. Known for his inspired arrangements, inventive grooves and hummable melodies, Ben draws from the jazz tradition and a range of influences from rock and folk to 20th century classical and world music traditions, seamlessly blending them into a cinematic, cohesive whole.

Special Artist Rights Supporter tickets include reserved balcony seating and access to a one hour meet and greet prior to the show with Marc Ribot and other artists, Chris Ruen (author of Freeloading: How Our Insatiable Appetite for Free Content Starves Creativity), and Jeffrey Boxer, Executive Director of c3.

Ad-based piracy is a direct attack on the livelihoods and art forms of today’s content creators. And the major tech players who sell ads to these websites make large-scale piracy possible. Artists have always been the ultimate free speech activists. That’s why we’re asking Google and other large tech corporations to stand with us and stop brokering ads to piracy sites. It’s not about censorship. It’s about making sure current and future generations of artists can continue to create.

October’s concerts highlight the creativity and impact of artists across the spectrum from indie to the avant-garde as they stand up for their rights in the digital domain. Using music as a language of unification, we invite the artist community and the general public to listen, watch and engage.

17. Paula Jeanine Bennett & A Village Of One Choir

Paula & her choir sing in the BWAC’s “First Floor Galleries” on the Brooklyn Waterfront. Three premieres as well as music from Paula’s song cycle, A Village Of One.

A Village Of One is a song cycle with lyrics, melody and stage realization by Paula Jeanine Bennett.  It has been created to be easily adapted for a variety of locations and cultures.  The first performance of A Village Of One was in Java, Indonesia, where the piece is known by the Bahasa Indonesian name “Sendiri Di Desa” .  The following is a record of the Javanese incarnation of the piece.

Ad-based piracy is a direct attack on the livelihoods and art forms of today’s content creators. It’s time for artists to bring their voice and push back against tech profiteers who hawk the ads that sustain large-scale piracy. Artists are the ultimate free speech activists. Join with Rosanne Cash, Marc Ribot, Miho Hatori and Yuka C. Honda (of Cibo Matto), Wesley Stace and more celebrate creativity while acting in it’s defense.

This concert will highlight the creativity and impact of artists across the spectrum as they stand up for economic justice in the digital domain. Featuring Rosanne Cash, Miho Hatori and Yuka C. Honda (of Cibo Matto), Wesley Stace, Tessa Lena, Marc Ribot, Marcus Rojas Brass Ensemble and other special guests. This event will feature speakers and music, then culminating in a call to action. Music unifies us. Join the Content Creators Coalition to listen, then engage.