A birthday tribute to the late renowned Nigerian artist and activist Fela Kuti on October 18th brought together a diverse crowd and fun mix of performers for a night of extraordinary music. 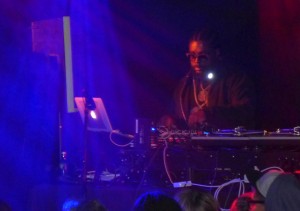 ?uestlove needs little introduction: perhaps most commonly known as the drummer for the Roots (now The Tonight Show’s house band) is involved in a wide range of projects, from spinning at Brooklyn Bowl each week, to writing a six part essay series on hip hop for New York magazine, to producing his own music variety show on VH1. Needless to say, he has impeccable taste. As a DJ, his unpredictable style (breaking the beat or phasing to another groove when you least expect it) one minute I’m dancing to Fela Kuti’s rhythm section and the next a crazy mash-up of European techno and Sly and the Family Stone. 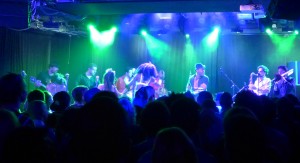 Chop & Quench, who is comprised of members of the cast and band of the (now finished) FELA! The Musical, played mostly original songs, with some Fela favorites. The stage was completely packed with instrumentalists and dancers, who looked nearly identical to Fela’s legendary Queens. The phenomenal dancers and backup singers electrified the audience.

The clear highlight of the night was the 11-piece Ethio-pop group Debo Band. They took the stage and a Balkanesque wall of sound immediately overtook me. Bruck Tesfaye, an exceptionally charismatic lead singer, could not have appeared more content just to be performing. On several occasions Tesfaye jumped off the stage into the crowd to dance with the audience. The ensemble (accordion, sousaphone, baritone sax, alto sax, trumpet, violin, drum kit, electric guitar, bass guitar, and trombone) by shear volume demanded attention giving way to a unison melody supported by their signature brand of Ethio-funk. Not only was I not expecting such an earth-shaking soulful performance, I was unprepared for how quickly the crowd fell in love with Debo Band. This electric synergy continued throughout their performance. Thank you Debo Band for bringing this unique and enjoyable sound to the world.

Concert Review: Elikeh passed the field test for producing dance energy and getting a crowd going…