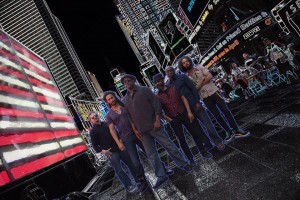 Let’s face it; the blues have been done to death. Far from its African roots, its American tradition, during the 60s and beyond, the blues were looted by the (sometimes well meaning) British and Americans. With only a few exceptions, it seemed to have been squeezed for every drop of essence it had, and what was left was sustaining mostly unimaginative musicians who were seduced by its romance and deceptively simple musical structure, and die-hard traditionalists who struggle to preserve the tradition.

Then, along came Tomás Doncker, and suddenly, the blues are new and alive.

Doncker came to light as an integral member of New York City’s downtown “no wave” scene in the early 1980’s. He’d worked with a wide variety of people such as Madonna, Steel Pulse, James Chance & The Contortions, Defunkt, J. Walter Negro & The Loose Jointz, Masabumi Kikuchi, Bootsy Collins, Yoko Ono, The Itals, Prince Charles Alexander, Ivan Neville, Bonnie Raitt, former P-Funk keyboardist Amp Fiddler, and Shamekia Copeland. In 2010, Doncker performed China, headlining at the Shanghai Folk Festival, as part of the Shanghai World Expo. In 2012, his label True Grooves Rec released Power of The Trinity, which features Bill Laswell, Ejigayehu “Gigi” Shibabaw, Mahmoud Ahmed, and Selam Woldemariam (who also served as production consultant for the project) and a host of New York’s finest jazz, funk and rock musicians. His release Moanin’ at Midnight: The Howlin’ Wolf Project, was developed during a critically acclaimed run at NYC SummerStage in 2013, for which the musical director and a featured performer in Diablo Love, a tragic love story with live music that re-imagined songs by Howlin’ Wolf (directed by Alfred Preisser, which being developed into a multimedia performance concert.)

A bombastic series of chords smashes its way through the speakers to open the CD’s title track “Big Apple Blues.” When the smoke clears, Doncker’s guitar makes some seductive yet menacing riffs, like a big, dangerous looking mofo walking out of the wreckage of a blown up building. Doncker’s vocals come in, with a worldly wise and worldly weary tale of life in the Big City. The drums and bass lay down a groove as solid as the streets while the keys and harmonica adds subtle tonal colors in the background, weaving in and out of the melodies like old time downtown street hustlers or shadowy djinns lurking in the shadows.

The next track, “Can’t Say No” struts and boogies with a confident abandon. Doncker’s vocals revealed his musical debt to Howling Wolf.

“A New Day” shifts the mood toward something more introspective and reminiscent of days gone by. A notable nod to gospel permeates this track, yet it’s less a stylistic thing and more of a sense of actually experiencing the culture it came from. A heavy (and all too short, if you ask me) guitar solo peaks through the Christian vibe, and makes a brief reappearance as the song ends.

The “light” is overcome by the “dark” as “Hellfighters of Harlem” follows. But this is also a retro perspective, as the ugly realities of African Americans being drafted into a war to fight for someone else’s freedom, and against an enemy who did no wrong to him (resurrecting by way of subtext a famous quote: “No Vietcong ever called me nigger”). Komunkankaa makes his appearance with a poem about Vietnam from the Black man’s perspective. Throughout, the chorus of “Study War No More” (obviously inspired by Isaiah 2:4) reveals Doncker’s Christian roots and values.

“At this Midnight Hour,” and “Little Blue Room” explore different aspects of blues. “Coney Island,” an almost doo-wop take on the blues, is another “I remember when,,,” song. Yet they are always done with a variety of styles; and never once become repetitive or redundant. “That Horse” moves toward the Howling Wolf sense of blues again, in an almost veiled reference to the dangers and inevitable ruin resulting from drug addiction.

“Ground Zero” kicks the listener into the deep end of the blues ocean. Here, the music returns to a political statement. Doncker becomes a preacher here and forces some very uncomfortable truths down the listener’s throats, and at the same time, comforts the listener who’s in shock by the ugliness of what happened on 9/11/01. His guitar solo was the most enraged of all his solos on the CD.

“Fun City” is the least blues song of the whole collection, taking the listener into a soul / R&B vibe. The lyrics lamented the transformation of NYC from the unique spirit it once had into the sterile corporate owned Disneyland it is now. For all its former glory and danger, New York City lost its essence and its passion, and Doncker is among those New Yorkers who mourn its passing.

The entire band works beautifully together. David, Dellatacoma, Faulkner, Gollehon, and Grubner execute the music with both the precision of a well-oiled machine, and the passion of expressing the inner meaning of the songs from a real need. Rolfe’s keyboards are colorful and always on point; never understating nor overshadowing the essence of the music. Barnes’ work on harmonica is nothing short of brilliant, and more than once had me doing a double take. These boys play for keeps.

My only disappointment was that Komunyakaa wasn’t featured more; I would have liked to hear what he has to say. That said, these are the kinds of songs (and poems) that could never have come from anyplace else than New York City, and from nobody else but the perspective of someone who’d lived there and experienced the NYC life for real for a long time. Doncker, Komunyakaa, and the fine, seasoned band bring these musical offerings to life, and place the listener in the midst of a unique urban experience that is all too quickly becoming a memory. Few people could have expressed it as eloquently.

CD Review: Tomas Doncker Band…It is powerful and joyous, hopeful without being sentimental, connected to its roots without slavishly imitating them.

Musician in NY: Tomas Doncker – his love and support for Ethiopian music and culture