Another great album release from Zudrangma Records (Thailand): The Paradise Bangkok International Molam Band from Bangkok. They have just returned from a successful Europe tour. Recommended by our friends from Hong Kong Metal Postcard.

Speaking of Molam: Molam is a multi-faceted folk music native to Laos and the predominantly rural Northeastern region of Thailand known as Isan – home to myriad ethnic groups and provinces, and once a part of present-day Laos. Mo meaning “master” and lam meaning “song”, Molam literally translates into “master singer”, but it remains more of an umbrella term covering over a dozen types of lam styles in which male and female singers can be backed by a free-reed bamboo mouth organ called  khaen, indigenous lute-like instruments called phin or the soong, a bowed fiddle called sor and a percussion ensemble featuring finger cymbals and hand drums.

Between the 1970s and 1980s Molam began to be electrified and integrated with Western instruments. When electric bass, effected guitars, electric organs, kit drums and horns played alongside the khaen and the phin. Maybe this is the end of original Molam music  due to the historical development of the music industry and the introduction of modern technolgy, 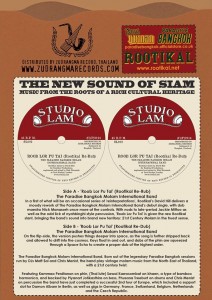 With Kammao Perdtanon who has been dubbed as the “Jimi Hendrix of the Phin” and the 72-year old Sawai Kaewsombat on khaen (a sort of an East Asian harmonica) the group features two absolute wizards of Molam. These legendary characters are being backed by a young red-hot Bangkok rhythm section: Piyanart Jotikasthira on bass, Phusana Treeburut on drums and Chris Menist on percussion.

They are considered as a future world music sensation. The combo performed at high-profile events such as Wassermusik Festival in Berlin, Belgium’s Sfinks and Poland’s leading open air Off and took the audiences by storm.

Concert Review: The Cambodian Space Project (Cambodia) takes us on a trip to the past, the now, and the future, and that is nothing short of 4th dimensional magic