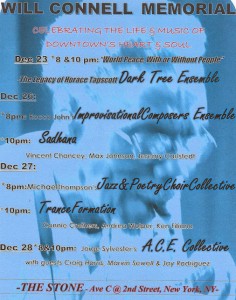 Will Connell‘s daughter, Safiya Martinez, and the musicians of WILL CONNELL MEMORIAL WEEK at the Stone would like to extend a warm invitation to all for this powerful event. Christmas week, DEC 23, 26, 27 & 28, downtown will celebrate the much-loved Connell, a force in creative music on both coasts over five decades. Will stood as an invaluable part of the original Horace Tapscott organization, a close comrade of the Black Arts Movement, groundbreaking voice of downtown Free Jazz and contemporary composition, and an elder statesman of the sounds of social change…

As winter descends over Alphabet City, the homeland of radical arts mourns the loss of one of its own. Saxophonist/bass clarinetist/composer Will Connell Jr died on November 19; his music and life are to be celebrated in a Christmas-week event at the Stone. He came of age in the 1960s as an invaluable part of Horace Tapscott’s organization and the LA Black Arts Movement, and stood as an underground giant of NY’s Free Jazz and New Music circle since 1975. His sudden passing occurred just weeks before his planned residency at the Stone (Dec 23-28) and days shy of his 76th birthday. The musicians who were to be a part of Connell’s residency have vowed to keep his vision alive in this series of concerts which now stand in his honor and memory; all of the proceeds will serve as a fundraiser for Will’s family.

The music performed will be an amalgam of Connell’s more than half-century as a performing artist: compositions ranging from those associated with Tapscott to his latest works as well as the free improvisation he was so fond of. The variety of sounds embody Connell’s stage and studio life; his resume sported gigs with Cecil Taylor, Sam Rivers, David Murray, William Parker, Charles Gayle, Chico Hamilton, and Anthony Braxton. A core downtown figure, Connell also engaged James Chance, Minor Threat, Black Flag and Ryan Adams in creative endeavors—a performance pedigree ranging from hip Jazz to New Thing to No Wave. From basement clubs to the Newport and Moers festivals to nation-wide TV broadcasts. The musical fabric Connell brings to the Stone also includes his work as a music copyist, laying down the score for Ornette Coleman’s “Skies of America”, the World Saxophone Quartet and many of Motown LA’s best. Known as an understated, quiet giant of the music, Will Connell’s voice is best heard through his alto saxophone, bass clarinet and flute, drenched in the rich tapestry.
The program at the Stone will open on December 23 with words by Will’s daughter, poet and actress Safiya Martinez, and then move into two powerful sets by Will’s 13-piece band, the Dark Tree Ensemble. This collection of works, “World Peace, With or Without People: Music from the Legacy of Horace Tapscott”, is split between LA compositions and those from Will’s nearly 40 years in NYC. This world premiere, featuring Tapscott’s brilliant music in perspective and also as a reference for Connell’s own compositions, promises to be historic and serves as a statement for these years of ongoing global conflict.

Christmas Eve and Christmas Day the club is dark, but the residency continues from the 26th through the 28th. The focus will be on Connell’s collaborations with other artists over the years including Vincent Chancey, Connie Crothers, Jorge Sylvester, Rocco John Iacovone, Golda Solomon, Andrea Wolper, Michael TA Thompson and many more, in large assemblages and intimate combos. The sounds range from free to world music, new composition to latter-day Beat poetry to exploratory visions. 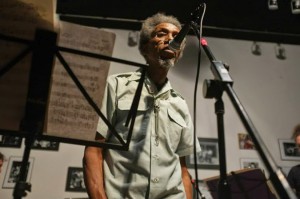 The son of a violin prodigy deprived of the profession by racist politics, Will Connell Jr became aware of both music and the struggle for justice as a child of the ‘40s. Jazz served as a source of art and great pride for the African American community, and its impact on Connell was nothing short of visceral: “I heard Billie Holiday at 17. Tears ran down my face like Niagara Falls”. That same year, 1956, Connell joined the US Air Force, serving some nine years. In between tours he purchased an alto saxophone but didn’t dedicate himself to music until surviving a chemical blast that blinded him for several days. Lying in an Air Force hospital in darkness, Connell vowed that if he regained his eyesight, he’d formally study this art that had driven him so deeply. This and the gnawing outrage about the military’s treatment of Black servicemen led to his decision re-join civilian life. Studies at LA City College (Dolphy’s alma mater) led to years of close work with Horace Tapscott wherein Connell served as reeds player and music librarian and copyist. The Tapscott organization was LA’s paramount arm of the Black Arts Movement and its immersion into African American culture and liberation had a lasting impact on Connell. By 1975 Connell relocated to NYC’s Lower East Side where he resided for the rest of his life. Through the decades he performed or recorded with such luminaries as Cecil Taylor, Anthony Braxton, William Parker, Rahsaan Roland Kirk, Chico Hamilton, Pharoah Sanders, Butch Morris, Roy Campbell, Sam Rivers, Steve Swell, Billy Bang, Henry Threadgill, Oliver Lake, Daniel Carter, Jason Hwang and many others. He also engaged in extensive projects as music copyist, most notably Ornette Coleman’s ‘Skies of America’ as well as for David Murray’s Big Band, the World Saxophone Quartet and a bevy of R & B and pop artists ranging from Michael Jackson and Roberta Flack to Stevie Wonder and Simon & Garfunkel.

Will Connell was a deeply relevant part of this rather unclassifiable musical genre which prides itself on free improvisation as much as post-modern composition, global sounds and the bite of revolutionary politics. Usually preferring to be a member of a band as opposed to its leader, Connell may have been the last of the modest greats. Having served as guest curator at the Stone in 2012, which brought him some note, and featured earlier this year in the Arts for Art organization’s series, and as a member of the Veterans of Free on the Tribute to ‘New York Eye & Ear Control’ concert in June, this master of the New Jazz is now recalled at his rightful place at front and center.