Fuzz Culture is a two piece electronica outfit from New Dehli formed in 2012. Consisting of Arsh Shparma (Also of The Circus) and Srijan Mahajan (Also of Half Step Down,Parikrama and Cyanide). What began as a studio experiment has evolved into a full-fledged live act which aims to combine melody and groove within a framework of mix-tape experimentation.

Last year Fuzz Culture released their Indulge.Divulge EP, and a full-length album is currently in the work. The band has been busy with the Zombie Dances at Hard Rock Cafe, Delhi and other venues across the national capital. They’re just touring the UK. 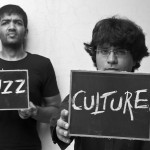