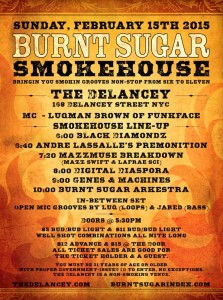 On the coldest night of 2015, musicians and listeners crowded into the blessedly heated basement if the Lower East Side’s Delancy. Burnt Sugar Smoke­house (in solidarity with the Black Rock Coalition) presented a night of NYC’s finest funk rock.

Confession: I arrived late. Permit me to offer my sincere apologies to Black Diamondz, André Lassalle’s Premonition, and MazzMuse Breakdown, whose sets I missed. Their reputations precede them; I would have enjoyed their music.

Digital Diaspora was the first band I heard. The band brilliantly embodied a new stage in the development of an old art form. Their use of both digital and organic sound was masterful as they invoked funk’s roots and reworked them. Their use of electronics, loops, etc. was quite imaginative. This was new wine in old skin – or vice verse! The socially conscious lyrics were not lost among the overall fun the band produced.

Up next was Genes & Machine. Here’s a band who embraces the concept of rock & roll vaudeville: somewhat like Alice Cooper by way of Sun Ra. Weird costumes, masks, war paint, and balloon-like appendages adorned their stage clothing. Ethereal synth pads suggestive of a Bach theme gave way to an acapella gospel dirge. Chaos and cacophony erupted out of nowhere. Then the funk that was the night’s theme took over. The funk element was essential to the music; without it, the band would not be able to contain the madness they created. They showed a notable mastery not only of musical form, but also of electronics. At one point, a brilliantly executed dance segment with insurrectionist political overtones manifested in front of the stage. This was followed by a ballad that channeled the band’s electronica into an emotionally charged soul / gospel like mood. The last song introduced a rapper called Ninja Uncle Sam. The music was classic funk.

Finally, the Burnt Sugar Arkestra took the stage. They began with a lively cover of Prince’s “Computer Blue.” The band is enormous; four horns, two guitars, violin, drum, bass, two singers, and keys / electronics crowded the stage. They embodied the timeless funk / soul / R&B tradition of operating like a well-oiled machine as they drive through their infectious grooves. After a few brilliantly executed originals, they segued into David Bowie’s “Rebel Rebel,” which they added a new life to. There’s something very endearing about Burnt Sugar. Their music doesn’t just entertain and make you dance; it embraces you like a long lost friend, and you find yourselves reminiscing about old times, and sharing new ones.

As mentioned in the beginning of the article, the presence of the Black Rock Coalition was both seen and felt. The work the BRC has done and continues to do is of vital importance. Parallels may be drawn between them and Enough is Enough NY; except that the BRC’s focal point concentrates on a segment of the musical community whose artistry and brilliance has been overlooked for reasons varying between utter stupidity to perilously close to evil. They and the musicians they represent are worthy of respect, admiration, and support.