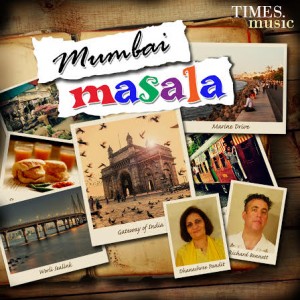 Pianist / composer  Richard Bennet is one of the forefront musicians who are blending Indian raga with jazz. He released several groundbreaking recordings (including New York City Swara, Raga & Blues, Rhapsody in Yaman, etc.), and performed at Lincoln Center Out of Doors, The Guggenheim Museum, BAMcafe, Brooklyn Museum of Art, and NJPAC. He has toured the world with various jazz and blues ensembles. 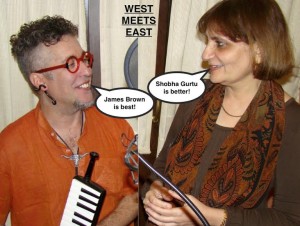 Dhanashree Pandit Rai holds a Masters Degree in Hindustani Classical Music from University of Bombay. She studied with Kirana Gharana Pt., Firoz Dastur Shobha Gurtu, Begum Afroz Bano and Batuk Dewanji. She’s a regular performer on All India Radio and has also recorded for Music Asia and Star Plus. She is a recipient of the prestigious Sur Mani award from Sur Singar Samsad. Dhanashree is one of the leading exponents of the thumri form of music and her repertoire also includes khayal, thumri, chaiti, hori, kajri, sawan, jhoola etc. She has performed in most of the leading musical institutions and Festivals in India, and traveled abroad extensively conducting workshops and concerts of Indian Classical music. Dhanashree is also a visiting lecturer at S.N.D.T. University, Mumbai, was awarded the “Pillars of Hindu Society” award for 2007-2008 by the Trans Asian Chamber of Commerce and Industry, and is also a founder member of SABRANG, an institution set up to demystify the classical arts.

The CD’s opening track, “Mahro Pranam” begins with the characteristic drone in Indian music, and a very short alap between Rai and Bennett. The main piece comes in, again with the vocals and piano moving within the structure of the melody. The interplay between the two voices has an ease and fluidity between them.

The next track, “Chalo Guiyan,” pushes the jazz element to the forefront. There is an almost French / Gypsy feel to the composition and the performance. But Dhanashree’s vocals never stray from the raga. Instead the harmony of Bennett’s piano forms itself to the contours of the raga.

“Lagi Lagan” begins with a lush piano intro over a distant synth pad. Eventually, the synth pad morphs into a tambura, and, the vocals come in. After some time, when the vocals had been dominating over a drone (as in traditional raga), the piano eases harmony back into the forefront.

“Sajaana Marwa” is one of my favorite tracks on this CD. There is a haunting, almost frightening beauty coupled with a hypnotic trance inducement that cannot be accurately described. It must be experienced.

As if to underscore this, the following track, “Aayi Badariya” extends the intensity of “Sajaana Marwa” in a heavy, deep blues.

The remainder of the CD explores the many possibilities that this pairing has to offer.

This CD is truly a marvelous work. Dhanashree’s pedigree and reputation is well deserved. She consistently proves herself to be a master of a genre of music with one of the highest performance standards in the world. She knows how to bring out the beauty of a raga, and never seems unsure of how to apply a raga to a musical environment containing (or dominated by) western elements and instruments. Bennett’s capacities in blending jazz and raga have evolved to a very sophisticated level. He has truly found a way to blend jazz and raga in a way that does not produce a mere hybrid. It’s a seamless and effortless focal point between two traditions separated by culture, nationality, and history. In this recording, jazz and raga have become one.

And it’s about damned time, if you ask me. Well done, Richard and Dhanashree! Very well done!