A trailer for the forthcoming feature documentary film of Srey Thy, singer of the The Cambodian Space Project by German director: Marc Eberle.

In 2009, Tasmanian musician Julien Poulson walked into a karaoke bar in Phnom Penh and heard a lone female voice singing Peggy Lee’s ‘Johnny Guitar’. This struck him as odd. Ordinarily the bars in Cambodia’s capital only allow singers to perform in groups of around a dozen, and youth and vacant stares seem to be favoured over musical talent. “They kinda look like the zombies in Michael Jackson’s ‘Thriller’,” he says. As he listened to her he realised why she sang alone. A voice as naturally gifted as this is a rare find. 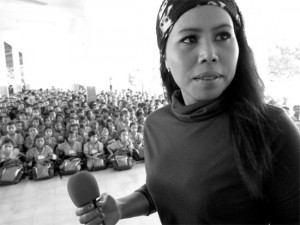 Poulson invited the singer, Srey Thy, to start a band with him and together they formed the nucleus of what has become The Cambodian Space Project, a remarkable group who not only cover and preserve songs from the ‘golden age’ of 60s Cambodian pop but also write their own dazzlingly original Khmer psychedelic rock. They’ve now toured all over the world, from Texas to the End of the Road, but the shows they talk of with most pride are the ones they play in remote villages across Cambodia.

To understand the importance of these shows, and their context, we have to go back to April 17th 1975: the day Pol Pot and the Khmer Rouge seized power in Cambodia. As Poulson says, they “ripped out the heart and soul of Cambodian culture. Their very ill-conceived manifesto was a kind of fucked-up Maoist thing, to return society to agrarian utopia, which meant destroying and dismantling culture. The Khmer Rouge very successfully destroyed everything, along with almost two million Cambodian lives.”

The Khmer Rouge specifically targeted anybody that they regarded as professionals or intellectuals. This included the majority of Cambodian writers, artists and musicians, many of whom were taken to the Killing Fields. Cambodia today is littered with haunting reminders of the horrors of the regime. At Choeung Ek, about 17 km south of Cambodia’s capital Phnom Penh, there stands a stupa, a Buddhist monument, with glass sides. Inside there are more than 5,000 human skulls piled on top of one another. Many are cracked or smashed in. It was built as a memorial to the 17,000 people killed there between 1975 and 1979, and stands as an awful testament of man’s inhumanity to man.

All traces of the music, including the physical records, from the 60s ‘golden era’ of Cambodian pop were systematically wiped out, while Cambodia’s most famous singers, Sinn Sisamouth, Ros Sereysothea, Pan Ron and Houy Meas were all murdered. Srey Thy tells me how Houy Meas was gang-raped and her body mutilated, and Poulson recounts the infamous story that Sinn Sisamouth was led in front of a firing squad and invited to sing one last song to the troops who would kill him.

“We do a cover of ‘House of the Rising Sun’,” Poulson tells me. “In this country for a band it would be a very silly, overblown and obvious cover, but in the context of a female Cambodian singer, taking the lyrics from Sinn Sisamouth who did an astonishing version of it in the Sixties, it has an incredible power.” Read more here: http://cambodianspaceproject.com/biography/

Concert Review: The Cambodian Space Project (Cambodia) takes us on a trip to the past, the now, and the future, and that is nothing short of 4th dimensional magic