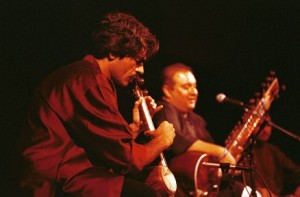 The Grammy-nominated Ghazal Ensemble, one of the most influential cross-cultural collaborations in global music, has made musical history with a series of innovative recordings that fuse their two complex classical traditions: the Persian dastgah and North Indian raga. Those recordings, as well as their live shows, have cemented their reputation for as genre-crossing artists: from Lincoln Center’s Mostly Mozart Festival to the London Jazz Festival, from Berklee College of Music to NPR’s Mountain Stage, the group has established themselves as electrifying performers, able to swoop from dizzying improvisational heights to deeply meditative passages with heart-stopping skill.

The idea for Ghazal began in 1995, when the New York City-based world music curator/producer Isabel Soffer (Live Sounds, GlobalFEST, World Music Institute), asked Kayhan Kalhor, “Of all the artists in the world, with whom would you most like to collaborate?” and the answer was “Shujaat Khan.” Soffer arranged for the artists to meet. The exploratory rehearsals were magical, and the musicians quickly began recording their first CD, Lost Songs from the Silk Road, which was released in 1997.

In most cross-cultural musical exchanges, the musicians rarely continue the collaboration beyond a single recording or tour. But from their Silk Road trio of studio recordings for the Shanachie label to the ECM debut, the live CD Rain, Shujaat Husain Khan and Kayhan Kalhor have made a uniquely long-term commitment to their musical explorations. In addition to maintaining solo careers that have made them stars in their respective traditions, the two musicians have returned again and again to explore the musical threads that connect the music of Persia and Northern India. In the process they have created an entirely unique, modern and influential body of work.

The rewards of that twenty-year commitment can also be found today in the ensemble’s ever-expanding audience: Ghazal continue to break down boundaries far beyond their traditions, and far beyond their original intent.

Son and disciple of the late sitar master Ustad Vilayat Khan, Shujaat Husain Khan is one of the leading artists in North Indian classical music. With a musical pedigree that extends over seven generations, Shujaat started playing sitar at the age of three and was already performing publicly at the age of six. An accomplished vocalist as well as sitarist, he has appeared at prestigious venues around the world, including Carnegie Hall and London’s Royal Albert Hall, and was the sole artist at the United Nation’s Assembly Hall in Geneva for their 2007 celebration of India’s independence. In addition to releasing over 60 CDs, Shujaat has also been a visiting professor at the University of Washington in Seattle and at UCLA. His most recent recordings include 2011’s Naina Lagaike, a collaboration with the legendary Bollywood singer Asha Bhosle, as well as a solo sitar recording Dil.

Three-time GRAMMY nominee Kayhan Kalhor is an internationally acclaimed virtuoso of the Persian kamancheh (spike fiddle) who, through his many musical collaborations, has been instrumental in popularizing Persian music in the West. He is the co-founder of the renowned Persian ensembles Dastan and Masters of Persian Music. He has toured the world as a soloist with the New York Philharmonic and Orchestre National de Lyon and has composed for TV and film, including Francis Ford Coppola’s Youth Without Youth, with Osvaldo Golijov. Kayhan is an original member of Yo-Yo Ma’s Silk Road Ensemble, with whom he continues to perform, and his compositions have appeared on all of the group’s albums. His recent recordings also include Kula Kullak Yaksi Mi with Erdal Enzincan (ECM) and I Will Not Stand Alone with Ali Bahrami Fard (World Village).

One of the today’s leading tabla players who has built a diverse international career, Sandeep Das has collaborated with a variety of genre-crossing artists. He has accompanied many of India’s greatest artists including Pandit Ravi Shankar (with whom he debuted at age 15) and Pandit Vishwa Mohan Bhatt, among many others. Sandeep is also founder of HUM (Harmony and Universality through Music), an India-based ensemble promoting global understanding through performance and education. He has composed for and performs with Yo-Yo Ma’s Silk Road Ensemble and has taught percussion master classes at some of the most prestigious schools in the U.S., including the Juilliard School of Music and Stanford University.

Kayhan Kalhor – Iran: Songs of Hope (Only solo US concert)