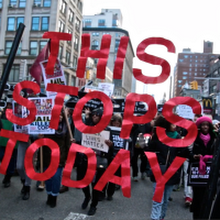 Why I am making PROFILED?

In June 2012 a police officer killed Shantel Davis, a young African-American woman, through the open window of her car. It happened in Flatbush, a Brooklyn neighborhood near where I live. Distraught residents described hearing the fatal shots and watching officers drag Davis’ bleeding body onto the street, where they left her to die.

As I listened, I remembered similar emotional responses of women whose innocent family members perished in NATO attacks in Afghanistan and Pakistan, where I made my last two films: Afghan Women: A History of Struggle, and 10 Years On: Afghanistan & Pakistan. Flatbush, New York seemed like another war zone and I decided it was time to make a documentary about what was going on here. Only recently has the film’s topic become the center of explosive controversy in media and society. Read more here: https://www.indiegogo.com/projects/profiled–4