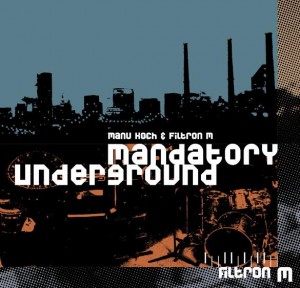 Manu Koch has released an EP CD with his project Filtron M; music platform which attempts to act as as a filter in the age of musical and cultural multiplicity. It is mainly a live act consisting of various units such as Astoria Roots and Unique Afrique that showcase Manu’s compositions and the community of international musicians he’s been associated with.

“Metro Poly Nation” (featuring Unique Afrique) starts the collection. A relaxing, yet intellectually stimulating groove weaving polyrhythm and counterpoint parts suggestive of electronica mixed seamlessly with jazz hold the song together. There is a subtle suggestion of a head by Koch’ Rhodes keyboard. The solos are all synthesizers that make eloquent statements without overpowering, or driving the music “out” of the groove.

“Entire Regions” (featuring Astoria Roots) attacks the groove with more aggression, and then settles into the fusion type vibe Koch is noted for. A complex head leads the song into its solos. The Afro-Caribbean beginning of the song are swallowed by the jazz fusion elements, yet never leave entirely, occasionally asserting themselves. But the jazz fusion holds absolute dominion.

“Label La Belle” (featuring Astoria Roots) begins as an introspective conversation between Rhodes piano and bass. A smooth (no, not “smooth jazz”) head emerges and the bass establishing a solid framework around which the more liquid elements of the music flows. The effect here is deceptive, because the mind interprets the bass as being the liquid, flowing element, but this is an illusion. All the other instruments are given shape by the motion of the bass line.

“Template X” (featuring Unique Afrique) starts with a sharp, almost jagged synth pattern. A synth bass line almost suggestive of a rock song answers it, and, as the head is played, the song begins to invert itself like a Moebius vortex. The song takes the listener into all manner of unpredictable twists and turns without ever losing a solid groove.

Koch and his colleagues are doing some very interesting music. We may expect more great things form them in the future.