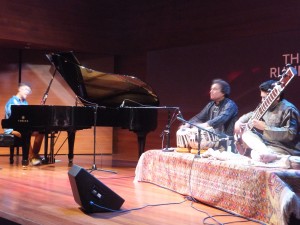 Date: March 20, 2015
Venue: the Ruben Museum (NY)
Review by Dawoud (All videos approved by the artist)

Pianist Richard Bennett has been making waves in the music community with his very original interpretations and experiments with applying Indian ragas and their inner concepts to the piano. On the spring equinox, he brought his work to the Rubin Museum of Art.

Bennett began with a solo piano piece based on raga “Megh” (a raga that is reputed to cause rain. Ironically, NYC was having a late winter/early spring snow storm the same night!) The structure was reminiscent of minimalism, but had some very interesting harmonic and melodic movements.

The next piece was based on an afternoon raga. It began with his left hand creating the piano equivalent of a tamboura drone, but the nature if the piano forced the emergence of a rhythmic pattern. His right hand created the various sections of a raga (a raga evolves in a very specific manner according to the various schools of thought in traditional raga). After some fascinating explorations, he took a dramatic turn and added chordal patterns. This grew into something vaguely resembling a blues/gospel piece.

The next piece, Bennett was joined by Naren Budkhar on tabla. They played raga “Yaman.” Bennett started with some unexpected chord melodies. Raga “Yaman” is a basic raga, but is defined by very specific movements in the melody (e.g. the tonic and fifth do not appear when the melody ascends). Bennett’s approach to chordal melodies stated within the boundaries of the raga. Budkhar came in with teental (16 beat rhythmic cycle), and added a very complimentary essence to Bennett’s piano work. This was not the standard “east meets west” hybrid that most people produce when mixing cultures. This worked on its own. At one point, they changed rhythms from teental to dadratal (6 beats).

Bennett’s mettle was tested further when Indrajit Roy – Chowdhury joined them on sitar. They played rag gunkali, a pentatonic raga with a strangely Japanese feel. Bennett’s use of the raga emphasized this suggestion of Japanese music within a two part composition based on his martial arts studies. They began with a breathtakingly beautiful invocation of the raga within the ensemble’s combined musical nature. It worked beautifully. The first part was idyllic and serene, the second part drew out a more severe and serious, almost martial feel.

In between pieces, Bennett was obliged to tell lengthy stories while Chowdhury retuned his sitar to accommodate the different pieces. Bennett made many jokes about it.

The next piece was based on the South Indian raga “Hansadawani.” The piano began with a solo one would not normally associate with Hansadawani. When the sitar and tabla came in, Hansadawani emerged from its hiding place. As with the previous piece, the piano and sitar communicated with each other with ease. After an astonishing exploration of all the possibilities within the composition, Bennett returned briefly to the original theme.

They concluded with a gospel like interpretation of raga “Malkauns” (using Bismillah Khan‘s famous interpretation as a template.) Budkhar did a breathtaking tabla solo.

An encore was requested. Bennett returned and did a beautiful solo piano piece.

Bennett has come up with a very original way of blending east and west. The entire concert is indicative of the task Bennett took upon himself; namely playing ragas on piano. He is not the first to do so: the work of Michael Harrison incorporated the piano tuned to just intonation and using the inner characteristics of this non-equal tempered tuning system. The results were masterful and sublime. Bennett, simultaneously like and unlike Harrison, took the process in a direction that owed nothing to any previous model. Rather than altering the piano to suit the essence of the raga, he altered the harmonic concept in such a way that the raga dictated harmony; something it never did before. I ask the reader to consider the nature of the piano. It came from a musical culture and tradition that evolved for centuries with no contact with Eastern music. And when serious contact was finally made in the 20th century, both east and west took decades to understand each other sufficiently before any meaningful meetings could take place. The process was maddeningly slow (with some wonderful leaps and bounds here and there.) Bennett’s work is showing a new way of solving a very old problem.