Fair Trade Music Seattle was launched through a public meeting in 2012. “We saw a major part of our industry in Seattle with no union presence,” explains Local 76-493 (Seattle, WA) President Motter Snell. “We needed to have interest from affected musicians, and when some came to us, we took action. This has the potential to build new leadership, and help improve wages and working conditions for area musicians.” 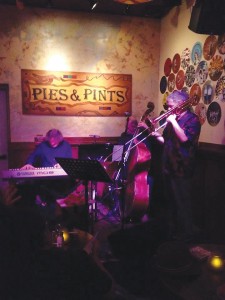 Building on the loading zone victory, a panel of a dozen musicians from varied genres met to discuss area venues, priorities and strategies. The panel identified two immediate new goals: teaching musicians how to get an effective performance agreement, and ensuring adequate sound in clubs.

The victory also drew in new activists from the music community. Steve Roseta, a local producer, heard about the loading zones from a radio show. “It made so much sense to me,” Roseta explains. “Musicians get the short end of the stick. Everyone else gets paid —the dishwashers, the cook, the sound guy—but sometimes not the musicians, the most important part of the evening.” When he deals with a venue that mistreats musicians, he won’t book shows there again. Fair Trade Music fits perfectly with his view of how the music scene should operate.

FTMS and Local 76-493 held a class on performance contracts in August, covering both content and how to negotiate a fair agreement. This included a template for an initial e-mail to establish specific terms, as well as separate templates for venue and private performance agreements.

Nate Omdal, a key FTMS leader and Local 76-493 board member, used the newly-developed agreement a few weeks later for a week-long gig at an area casino. He reports that he dealt with a lawyer on the other side, who initially questioned some of the terms. “But when I told him that it was a document developed with the input of about 30 musicians and the AFM local,he backed down and signed,” recounts Omdal. The other four members of Omdal’s band for the gig have subsequently decided to join the union, recognizing the value of collective action.

At the same time, FTMS obtained funds from Local 76-493, the AFM, and the Washington State Labor Council to provide diagnostic and tune-up service for sound systems at venues signing on to the pledge. The work will be done by IATSE sound technicians, and may cover modest equipment replacement. 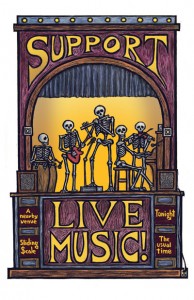 In return, FTMS pledges to:

To date, six venues have signed this pledge. FTMS musicians are in discussions with another half-dozen venues, and hope to have at least 10 Fair Trade venues by next month. When that happens, FTMS and the local will put out publicity and start mobilizing our communities to patronize Fair Trade venues.

Omdal stresses that the successes are due to involvement of musicians at every step. “It’s uniquely empowering,” he says, particularly when meeting with City Councilmembers and officials. “I learned how much power my voice and expertise have as a professional musician. The union provided me with the opportunity to see that.” He says it was also important that FTMS was able to present a clear plan for getting from point A to point B: “As musicians saw that we’re doing our due diligence to achieve our goals, they’re more excited to get involved.”

Jay Kenney, an FTMS founder and Local 76-493 board member, believes that it also helped to focus more on advocacy for musicians’ needs—such as the loading zones— and less on adversarial actions with venues. He says that flexibility helped to develop a base among musicians outside the union. But he also notes that once FTMS has the clubs that treat musicians well on board, they’ll have to be prepared totarget venues with less friendly policies, and look for effective strategies to bring them around.

Omdal recalls a personal experience that opened his eyes. His band and two others— one from out of town—had a gig at a well-known area club. When they got there to set up, the owner told them that their income would just be advance ticket sales. The touring band immediately said they’d leave to go to the next city on their tour, since it would be a waste of time to stay. Then Omdal said that, without that band to open, his band would also be wasting their time, and would just go home. The third band quickly followed. Suddenly the venue owner found it in his power to provide all three groups decent pay for the night. Omdal reports that he then understood the power that musicians have.

FTMS includes about 40 area musicians, close to 30 of whom have been at meetings this year and actively participate. A dozen musicians have initiated outreach to clubs to get them to sign on as FTM venues. Most are not yet union members, though there’s increasing consideration for joining.

Through their action, the musicians are also learning how to join with the rest of the labor movement. When musicians discovered that an area restaurant at which they played is on labor’s “do not patronize” list for breaking the restaurant workers’ union (UNITE HERE), they asked a representative from the restaurant workers to come to a local board meeting to explain the situation. Kenney, who plays regularly at the restaurant, found the presentation helpful. He notes, “There are going to be times when we’re presented with a conflict of interest where, as here, publicizing a venue that treats us right may not be appropriate, given the way they treat other workers. We came down on the side of labor, our natural base.”

Omdal adds that, when he heard how dishwashers and servers had been treated, he recognized that musicians were higher on the food chain than he’d realized. He says that he identifies more now with the other workers at the restaurant. Both Omdal and Kenney are eager to work with UNITE HERE on common interests.

The campaign is spilling over into other areas of the local’s work. Susan McLain, a harpist and long-time leader of Local 76-493, credits the new emphasis on internal organizing for spurring efforts to improve area standards for harpists, patterned on the FTMS model. She’s working with the local’s organizer and other harpists to ensure that they get reasonable pay and conditions.

“We need to see ourselves as workers,” stresses McLain. “We can’t be in a race to the bottom, or we all lose. When we go out to play, the key word is ‘sustainable’—we need a living wage. Fair Trade Music is a good platform for union and nonunion musicians working together.”

Local 76-493 President Snell believes that FTMS is helping the local as a whole. “It’s getting people talking,” she said, “and putting a good spin on the local. It’s raising the relevance of the union in our community.”

Next up for FTMS, in addition to the continuing efforts to gain additional venues, are a couple of new projects. Musicians will be meeting with each member of the Seattle City Council to seek support for FTMS, but specifically to increase the number of musician loading zones, and to examine unreasonable restrictions in contracts with public music festivals that receive city funding. FTMS will also explore reaching out to corporate sponsors of festivals that treat musicians unfairly. They’re planning another class on performance agreements in February or March.

Kenney is optimistic about the future: “We’ve made real penetration into our community, and there’s a lot of excitement,” he says. Omdal stressed the lesson that musicians can win when they have the will, and a strategic plan. Local 76-493 Vice President Joan Sandler, a violinist, says, “We’ve the venue owners have all the power in dealing with us. But musicians can take that power back, and have greater control over our working conditions.”

Musicians review the clubs that they work in at Venuology.