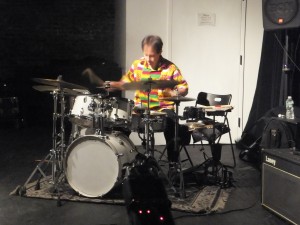 Review by Dawoud Kringle  (All videos courtesy of Lucas Ligeti)

As of this writing, drummer/percussionist Lukas Ligeti is curating a series of performances at Stone. On Tuesday, March 31st 2015, he offered a solo drum set performance, to be followed by a duet with guitarist Gary Lucas.

The music began with mallets on cymbals and toms. A simple rhythmic pattern emerged and evolved into a complex interweaving of contrasting patterns.

Throughout the performance, the music would shift in a subtle (and occasionally not so subtle) way from one structure to another. His approach to solo drums seems to resemble aspects of abstract art/painting. He would juxtapose different colors, shades, and textures in a way that the effect would be subconscious, yet the mind is always aware of. Groove and of new patterns evolving from the sonic palette.

Ligeti has an uncanny ability to make each sound/texture of the components of his drums startlingly distinct. Perhaps this is the after effect of the concept of solo drums in the setting and context of the Stone (The Stone is an interesting place. The diminutive venue is free of any consideration except music. This stripped down approach forces the attention on the music). That said this sharp distinction did nothing to dilute the performance’s harmonious aggregate. There were times I attempted to identify the style or genre Ligeti was inventively drawing from. I could not; his style utilized what he had studied and assimilated in a very original manner.

I stayed for the second set. This time Ligeti was joined by guitarist Gary Lucas.

A sparse beat and ethereal guitar sounds filled the room. The drum beat filled out and complimented itself with occasional ornaments from the glockenspiel, while liquid melodies and spacey echoes flowed in and around it.

The music took a darker, almost alarming turn. The guitar that was once idyllic was now threatening and nightmarish before returning to the luxurious and seductive.

Throughout the performance, the duo fearlessly explored all manner of textures and emotional catalysts. Neither musician rested comfortably on one idea or musical mood. Every moment was something new. And both musicians communicated beautifully with each other.

The set ended with a violent climax that faded into a drum solo, occasionally punctuated by abstract sounds. The music slowly dissolved into a crystalline rain.

Lucas is an accomplished and inventive guitarist with a marvelous musical sense. However, his use of effects is truly outstanding. He is one of those minority of guitarists who understood the lesson Jimi Hendrix taught us; the guitar, effects, and amps are components of a single instrument. The electronics are just as much part of the instrument as the strings. On this, Lucas is no mere follower of the Hendrix tradition; he has clearly found his own voice, and by default, extended the tradition.

CD REview: Hypercolor…Very recommended for those listeners who are not afraid to take some adventurous music out for a wild ride in the night