Is this a fabulous band, or what?…Can women play, or what…And do women belong in The Jazz at Lincoln Center Orchestra, or what?

Yes…it’s time for women to be on the The Jazz at Lincoln Center Orchestra (JLCO) bandstand!! There are many female instrumentalists talented enough to play jazz on a national stage. Unfortunately, despite the numerous contributions of women to jazz music over the years, the JLCO has never had a female permanent member. Why is that?

Why doesn’t Mr. Marsalis audition women? Apparently, the JLCO musicians earn $100,000 a year. So why can’t women get an equal shot at making this kind of money? Is it OK to exclude women if the organization takes tax money? 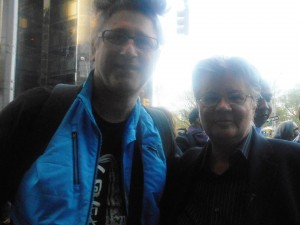 Ellen Seeling (chairperson of the non-profit organization Jazz Women And Girls Advocates/JWAGA) says: “…We believe that Title VII of the 1964 Civil Rights Act mandates all businesses classified as “employers” (not hiring independent contractors) are subject to this federal employment law, as well as state and local laws, and provide equal access to all qualified applicants. Since the JALC Orchestra with Wynton Marsalis has never posted job openings nor held public auditions of any kind, we believe they must change their hiring policy. We also believe that any organization taking public money and private donations should not discriminate…If I’ve ever gone above and beyond for you as a friend, employer, mentor or teacher, now’s the time to give back.”

All this said, yesterday afternoon from 6pm to 7pm the JWAGA organized a rally at NY’s Jazz at Lincoln Center to advocate for open job postings and blind auditions for new hires in the JLCO. 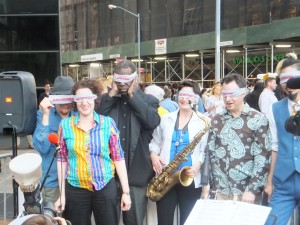 The location and the time of the rally was perfectly chosen by the organizers. It happened in conjunction with the JALC’s annual Gala Fundraiser at 7pm. The rally started with live music by saxophonist Virginia Mayhew and the Virginia Mayhew Group, with special guest Roberta Piket performing two standard songs. Followed by Ellen Seeling’s short speech and then again with live music till the end. The rally ended with a photo session with the band and the attending crowd.

Unfortunately, I couldn’t see any guests of the JALC’s annual Gala Fundraiser showing interest in this rally. They jumped out of their taxis or limos and walked to the entrance ignoring this important event. I expected to see officials of my union, Local 802, and supporters of the JUSTICE FOR JAZZ ARTISTS campaign, but apparently nobody was there. I’ll find out why.

Whyever, whatever or whoever…DooBeeDooBeeDoo NY is 100% behind JWAGA‘s cause and will keep you informed about future activities! 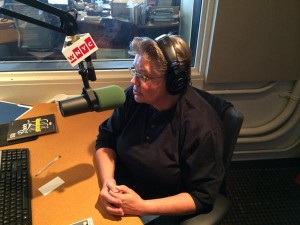