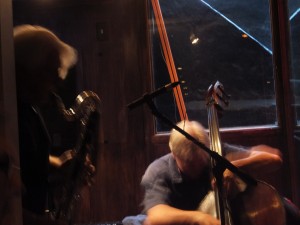 On Sunday, May 17th, 2015, the Whynot Jazz Room hosted a marvelous evening of music which was curated by Andrea Wolper and part of the Why Not Experiment? Series.

The evening started with the duo of Vinny Golia (woodwinds), and Ken Filiano (bass).

Filiano started with some harmonized glacial atonal chords. Golia on bass clarinet responded with low notes that evolved into Ornette like flights through the cosmos. The melodies on the horns became more introspective and lyrical, while
The bass used electronics and alternative techniques to paint abstract and otherworldly sonic landscapes. Their second offering featured Golia on ney. It had a Zen like quality that still exploited the very western (or should I say trans-western?) essence of this music. This became a highly emotionally charged lament. Their third piece was a startling and aggressive thing that slashed madly at itself. They concluded with a demonstration of what would have happened had Albert Ayler visit John Cage’s realm. Throughout, one got the sense that, no matter how “out” they were, they never lost touch with the basic idea that this is jazz. 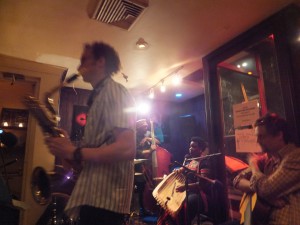 After a mad flurry of activity in Why Not’s tiny jazz space (which, in my opinion, is much too small and uncomfortable for the kind of music being presented), Jeremy Danneman, featuring Sophie Nzayisenga, took the stage. The band consisted of Jeremy Danneman (saxophone and woodwinds), Sophie Nzayisenga (inanga and vocals), William Parker (bass), Anders Nilsson (11 string guitar), & Tim Keiper drums / percussion).

The sax began with an Afro-blues melody, which the band drew itself into. A beautiful groove came to life. Sax led with a melodic excursion into the mood of the song. Nzayisenga took the next solo with an understated and subtle working within the part she was playing. Danneman answered her, adding another flavor to the song. His use of accidentals was sparse and perfectly positioned. Then he brought out a baritone sax. The rhythm section responded with a rise in intensity. The music reached a climax, and Nzayisenga ended with a beautiful statement.

They continued with one of Nzayisenga’s compositions. There was something strangely sad about the song, as if joy was struggling behind the sadness trying to find a way to make itself known. Her vocals displayed astonishing phrasing (I only wish I understood the words). Danneman on alto sax brought his own commentary to the song. The music had a most profound effect.

I must pause and comment on Tim Keiper & William Parker. Keiper, being the only percussion in an African music ensemble, had a difficult job of filling a very big musical space. He proved himself more than equal to the task. Parker’s command of the bass in this context was nothing short of masterful. This is no surprise, of course, Parker being one of NYC’s greatest bass players. But this was the first time I heard him in this context. To hear him, one would think he was studying this music his whole life. Who knows? Maybe he has.

The next piece was called “Angry Woman.” The band created a bright sounding 6/8 stride, while the sax wove its way in and out and through all manner of contrasting tonality. It was as if Ornette Coleman was stepping into a different musical environment and gently insinuating harmolodic a into a place it had never been.

Anders Nilsson (on 11 string classical guitar) began the next piece with a beautiful solo, blending a comment on the Rwandan vibe with a north European jazz overtone. The band eased in and explored the music. A soft “almost” Latin jazz song emerged. Nilsson took a solo that brought the music to a different mode. Parker’s response was flawless, and then seamlessly returned to the original vibe when Danneman returned with the sax. Eventually it coalesced into a hypnotic groove, and gently ended.

They continued with another of Nzayisenga’s songs. This had the feel of a blues, as if Howling Wolf was a woman born in Africa. This would not be the first time I heard musicians from various parts of Africa playing what my western ears interpret as blues. But it’s always interesting to hear the variations found in the different places. Nzayisenga, being from Rwanda, had a different approach and feel for this than, say, someone from Mali. Later in the song, without warning, she played a different phrase, and the music took on an almost Hi-Life flavor. They brought this to a joyful level of intensity.

They concluded their performance with a piece called “Dry Season.” Nzayisenga began with a somber intro. This piece truly evoked its namesake: one’s mind was filled with a very specific image of a rural environment wherein water and rain was scarce.

I think that, while everyone in the band was clearly a master of their craft, Nzayisenga brought something new and unexpected to the performance. I watched and listened carefully as she played the inanga. It is, to the eyes of an American, an unusual instrument: a roughly rectangular harp like instrument that she played using techniques I would never have expected (and I play string instruments). Her mastery revealed itself in ways that are subtle, and not obvious to the listener. Yet when one opens oneself to what’s really happening with her playing, a new way of listening and experiencing the beauty of this music is revealed.

We are really going to miss her.

And we still really need your help. Please consider giving even a small contribution to our online fundraiser. Time is running out! Over the past few weeks, Sophie, my band, and I (in various combinations) played numerous farmers markets, visited three schools, packed the house at some gigs, were featured on two radio stations, and recorded what we hope will be “the next big thing” (at least for people with a modest degree of taste.) We cannot do it without your assistance, and we are still dangerously close to not being able to pay the bills we’ve accumulated along the way not to mention the ones that are still coming, including flights, visas, room and board, recording, and more. This project has been a great success; now we just need to pay for it. Please,won’t you give us a hand. Time is running out, and there won’t be another reminder!

Jeremy Danneman…is not just a street muscian but also a music activist taking “his” music to the streets around the world.

Music Activism: Parade of One Update

Please support Parade Of One’s Sophie Nzayisenga (Rwanda) campaign to invite her to NY next year!