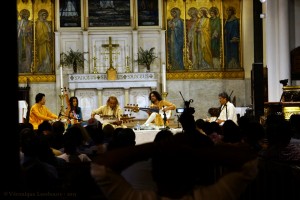 HarmoNYom in collaboration with the Brooklyn Raga Massive presented “A Divine Dance of North Indian Ragas and Taals.” The concert was held at St. Peter’s Chelsea Episcopal Church.

The lineup was nothing less than stellar.

Ustad Aashish Khan played sarod. Khan is considered one of the greatest living sarod players, descended from an illustrious musical family. His earliest training was from his grandfather, Acharya Baba Allahudin Khan, his father Ustad Ali Akbar Khan, and his aunt Annapurna Devi. His first public performances were with his grandfather. He has performed the world over, and in addition to being a world class master of traditional sarod, he also played in the Indo-American fusion groups Shanti and The Third Eye. He is also a teacher, formerly of the Ali Akbar Khan College of Music, and presently with the University of Washington, Seattle. 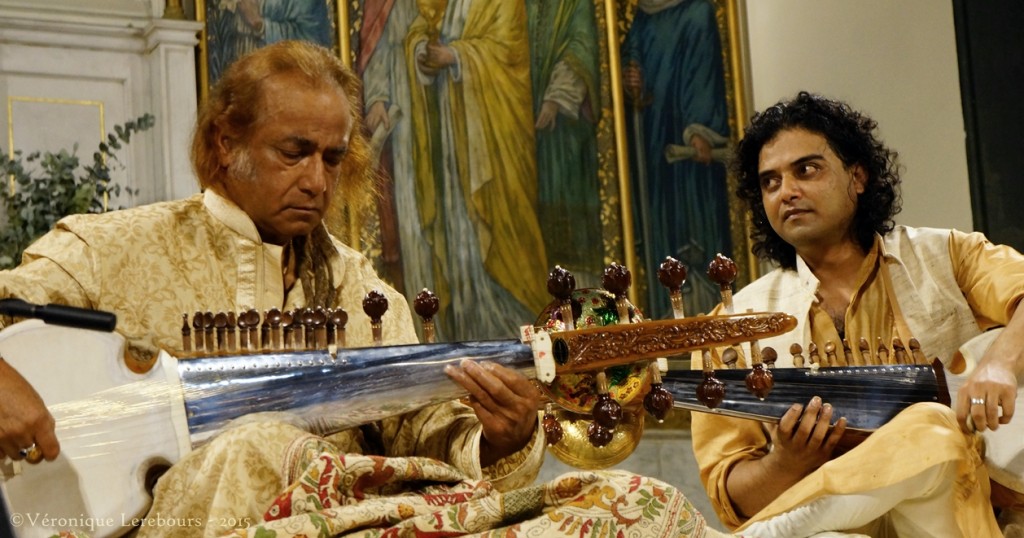 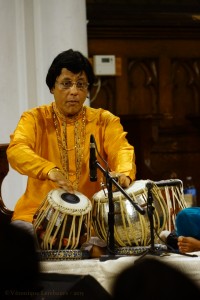 Pandit Anindo Chattergee is one of the world’s best tabla players. A student of Pandit Jnan Prakesh Ghosh and the leading exponent of the Farukhabad Gharana of tabla. He has performed with Ustad Ali Akbar Khan, Pandit Ravi Shankar, Ustad Viliyat Khan, Ustad Shaheed Parvez Khan, and many others. He has been awarded the Sangeet Natak Academy Award.

Pandit Manik Munde is known as “the player of the singing 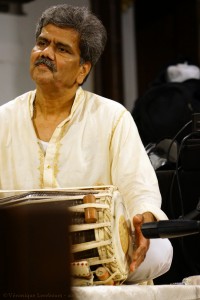 pakawaj.” He studied with Mahanat Pandit Amarnath Mishra and had worked with people like Pandit Hari Prasad Chaurasia and the Dagar Brothers. He has also accomplished a great deal in incorporating pakwaj into fusion and jazz.

They began with raag Marwa. In the alap, Khan and Shobhakar took their time delicately invoking this difficult raga. Shobhakar was more intense in his pursuit of the raga, while Khan seemed to have achieved it before having played a single note. The younger was a warrior, and the elder was a poet.

There was one point where Shobhakar was making a statement, and Khan interjected a brief melody in the lower register. It had the appearance of a suggestion or guidance. At times, the two played the exact same melody simultaneously before one of them took the lead.

When the jor began, the raga was transformed from its airy, free form state to a solid form. Whereas before, Marwa was an insinuation, now she stood before you, looking in your eyes. The pakawaj was the only percussion at this point; Chattergee taking a subtle directorial role for the rhythmic motion. The two sarodists traded solos and brought the raga to a feverish jhalla quite soon in the performance. They brought it to a sharp conclusion.

After the inevitable tuning, and the sound proper tending to a technical inconvenience, they began a gat. Chattergee and pakawaj explored the mysterious realm where drupad and kayal found a focal point. Mixing the older dhrupad style with the newer Khayal is a rare combination. Khan and Shobhakar did likewise; the phrasing weaved its way in and around the interplay between the two percussionists. Marwa was engaged in a most complex and sublime dance.

Pandit Chattergee took some amazing solos. But he was clearly displeased with the sound. At one point, he struck his tabla with extreme sharpness, obviously to test the reaction of the acoustics in the room. Once the problem was solved (more or less; the concert was troubled by feedback and other acoustic anomalies), they brought the music to a brilliant climax.

After a short break, and a long struggle with the sound problems, they returned with a short raga. The alap was very short, and they went into a medium slow jor quickly. Chattergee took a dominant role in the percussion. The raag was performed with passion. Each taan and each swara flew effortlessly over the powerful rhythms and evoked the raga’s mood eloquently.

Once again HarmoNYom (with Veronique Lerebours at the helm) in collaboration with the Brooklyn Raga Massive presented our city with another concert of classical Indian raga. These events are a jewel in the crown of the New York Music scene, and more than deserving of support and attention.

The Ragas Live Festival 2015, one of radio’s most ambitious events, expands in it’s fourth year on SATURDAY JUNE 20th. Over 70 world-class musicians will perform Indian Classical Music over a period of 24 hours, all broadcast on WKCR.
This year it will now by now be followed on SUNDAY JUNE 21st by free concerts in Central Park.

1- On SATURDAY JUNE 20th, 2015 (midnight to midnight) WKCR will broadcast 24 hours of live performances throughout New York City at 89.9 FM-NY and internationally at www.wkcr.org. The festival will be recorded and made available on both the WKCR archives online at www.wkcr.org and at www.nycradiolive.org.
2- This will be followed by free concerts, workshops and Mass Appeal of Indian Drums (open to everyone) in Central Park – Dairy Lawn, mid-park on West 65 Street (5/6 Aves) New York, NY from 1:30-8pm on SUNDAY JUNE 21st as part as Make Music NY (MMNY).