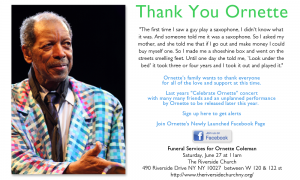 It somehow seems inappropriate to write a “play by play” about this event. Sure, I could list those who spoke, sharing beautiful and sometime hilarious anecdotes, or described his genius and influence. I could talk about the beautiful music offered by Pharaoh Saunders, Cecil Taylor, Henry Threadgil, Bachir Attar, Geri Allen, Ravi Coltrane, and others. Somehow, that doesn’t quite work in the context of Ornette.

It is interesting how every once in a while, a man or woman of extraordinary vision comes into our lives. Ornette single handedly changed the course of music. His ideas had no historical precedent, and brought beauty and sublime meaning to everything he touched.

Those who knew him or met him knew he lived completely in a world of ideas. Some people would think this was just the ramblings of a spaced out musician. Some dismissed him as a flake or a fake. However, history proved him to be a visionary, and an original thinker.

Ornette taught us to see with new eyes and hear with new ears. He opened doors behind which were possibilities we’d missed,

My path crossed his on a handful of occasions. He was one of the most extraordinary men I’d ever met. And playing with him took me to musical places I’d never been, and once reached, could never go back.

And now, he has been called home.

If there is a moral to the story of a man named Ornette, it is this. Seek beauty, walk your own path, speak your own story, and sing your song with your own voice; but do so in harmony with everyone else.

I salute Ornette Coleman, and thank Allah for his life.