GUIGUISUISUI’s second album Write Me A Death Letter has arrived at Metal Postcard Records and it’s a killer. Ten tracks of twisted 8-bit driven scuzz rock from the smog of Beijing, like traveling through a twisted time warp from ‘50s rock and roll and electric blues, to ‘60s hard rock and garage, to ‘70s punk rock and electronic noise. It’s every bit Rocky Erickson, Johnny Thunders, and Muddy Waters as it is a jilted journey of its own design, a run away train guided by the dark trio of GUIGUISUISUI, King Necro, and Lord Kamemameha.

While 2013 saw the first handful of formative GUIGUISUISUI releases and 2014 saw a couple of 7” EPs, 2015 is the year that sees the 8-bit zombie most polished work to date. A year in the making the album was written during and immediately after a forty something date tour of China, Malaysia, Singapore, Indonesia. The recording was done at Yang Haisong’s (PK14) Psychic Kong studio immediately after ANOTHER tour (this time in Taiwan), with additional recordings wrapped up in China, Britain, Australia, and Canada just in time for GUIGUISUISUI to jet off again to South Korea and Japan and all over China. 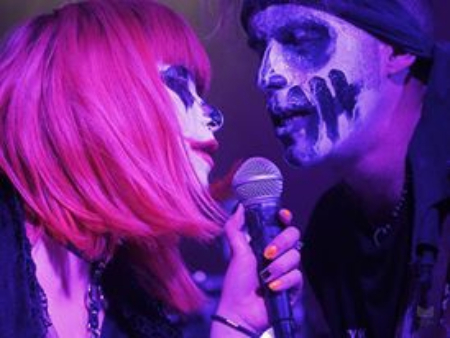 The artwork for the album was painstakingly hand inked by British artist King Natcho (who is apparently part of the same dark kvlt as King Necro), which gives the listener a beautiful image to look upon as they listen to songs about homicide and zombies. In addition GUIGUISUISUI was recently featured on China Radio International’s web series The Sound Stage playing some songs off the new record, while GGSS has also created a number of music videos to accompany a handful of tracks off the album (keep an eye out for those in coming weeks).

To support the new record GUIGUISUISUI will play a dates in Europe in the summer and in China in the fall. Stay tuned to Metal Postcard Records for more info.