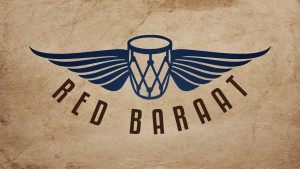 RED BARAAT a unique (brass) band with a unique sound. A hardworking band for about 6 years.
Please watch the two videos below which will tell you visually the new musical developments of this band. This band could be a role model of “how to succeed in today’s music business.”

What’s so great about this band is that they are not afraid to experiment with new sounds and musicians. Not maintaining the status quo, repeating themselves but reinventing themselves. By doing so they may lose some fans who can’t accept the new musical changes, but this is something a band should never consider as a minus in their career.

It’s great to see one of my NY favorite drummer Chris Eddleton joining the RB.

“We just returned from Europe, where we played Peter Gabriel’s WOMAD Festival in the UK. It was an amazing experience that owes all the thanks to music fans. It rained 2 out of the 3 days and that didn’t affect people from smiling, dancing and taking in the sounds. It was a remarkable time. Check out our video below of us rocking with the crowd.” – Sunny Jain

Check out also the interview and live video footage I did from Sunny Jain and RB live performance at Brooklyn Bowl (Brooklyn some time ago.