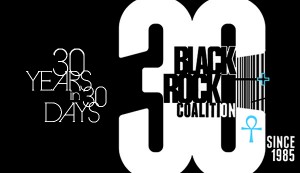 For 30 years, the Black Rock Coalition has proved that Black musicians have a central, vital role to play in shaping edgy, righteous, driving rock. Remembering the untold numbers of Black musicians who made rock what it is, while nurturing a scene, the volunteer-powered organization insists on the slow build of process, of people interacting in the flesh, in the face of major tectonic shifts in society and music.

“Everything comes down to the process. There’s a process to everything under the sun. Nothing we see on the surface, for a lot of artists, is the whole,” explains Darrell McNeill, BRC-NY Director of Operations. “The body of work goes way deeper. That’s what sets us apart. After thirty years, we know there’s a process. You have to go work out your thing to make it presentable. You can’t automatically jump from A to Z. You have to be patient enough. That’s what the people we support do.” 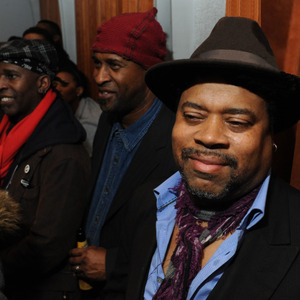 The people will come together for 30 events in 30 days during the month of September to celebrate the BRC’s 30 years of rock advocacy and musical pioneering. Bringing together elder statesmen of rock (Vernon Reid) with up-and-coming new names (Tamar-kali, Unlocking The Truth, Pillow Theory), the organization will hold listening sessions, retrospectives of performance highlights, showcases, and a gala exploration of Jimi Hendrix’s work with Band of Gypsys, a seminal piece of rock history made new and thought-provoking by the BRC Orchestra (BAMcafé; Sept 18-19, 2015). Full event details at blackrockcoalition.org.

“We assign real, significant value to music, in an era when musicians can feel their work is increasingly devalued,” says BRC President LaRonda Davis. “It is not instant. The process isn’t easy. There is work, and that’s on the part of the audience as well as the musician.” This work happens in community, not just in digitally mediated isolation. Which is why BRC is celebrating by bringing musicians and music fans together to look back and see forward.

The wide range of venues, people, and approaches broadcasts the heart of why BRC has stuck to its original aim of making greater space and providing a boost to African American artists who are venturing into powerful rock territory. The scene is there, it’s evolving, and it’s a powerful platform for Black expression. “Our great strength was we never tried to dictate where the scene went,” reflects Earl Douglas, Jr., BRC-NY’s Executive Director. “We never said, this isn’t this or that, so we won’t support it.” 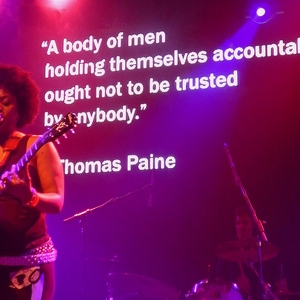 Several of the celebration’s live events will flow into the next edition of BRC’s Rock’n’Roll Reparations compilation dedicated to its Million Man Mosh. “Our goal is always to get people together musically, live or recorded,” says Davis. “We’re going to be looking for songs that bring to light some of the issues that affect people and musicians of color, be it police brutality and incarceration or educational inequality.”

“That’s why BRC is still necessary to educate,” muses McNeill. “We own our culture, just as equally as we own our art. The two are inseparable. To use James Baldwin’s term, they are more than inseparable, they are insoluble.”

Six Events Not to Miss:

Hendrix’s final recorded project saw the legendary artist engaging more explicitly with his Black Southern roots when he formed Band of Gypsys. BRC Orchestra re-imagines and furthers this often overlooked moment in Hendrix’s career, one of the few guiding lights for generations of Black rock musicians.

A performance of some of the best the BRC has to offer (including BRC member band Unlocking The Truth) followed by a free party for those who believe in the BRC’s mission. Food, drink, music and good times along the lines of those well-remembered, community-building BRC hangs.

BRC veterans and newcomers will gather to listen to new tracks and give each other feedback and encouragement, a prime example of the BRC’s community-building approach. Favorites will be tapped for upcoming BRC compilations and showcases.

From rough-and-ready early showcases to historic shows, this evening at fellow grassroot Imagenation’s RAW Space will give artists and those who love them a chance to revisit key moments in BRC’s performance history.

$10; free to BRC members and members of the WMRC community

Reviving the BRC tradition of supporting musicians’ career development via skills-building clinics and master classes, aspiring singers will learn tricks of the trade and ways to approach their instruments from industry leaders.

Launched in 2012, ‘Million Man Mosh’ continues its tradition of being a platform for music, community networking and political organizing. The driving force in this third edition is solidarity with Freddie Gray, Michael Brown, Eric Garner, Tamir Rice, Yvette Smith, John Crawford and countless other victims of excessive violence by law enforcement agents and a historically unjust legal system. Some of the proceeds for MMM III will go to community groups for social justice.