Some time ago, I attempted something a bit different (perhaps unique) in music journalism. I attempted to review a concert I actually participated in. As narcissistic as this may appear at first glance, I wanted to give the reader a perspective from the stage, and share the experience the musician has while performing. On Friday, September 28th, I performed with the Brooklyn Raga Massive All-Star Orchestra (BRMO) at the Rubin Museum of Art, in our performance of Terry Riley’s In C. With your permission, I will attempt to give another “view from the stage.”

(Check this video out made by Charles Abraham

This is actually the third time I performed In C with the BRMO. The piece is comprised of 53 musical cells that are played for approximately one minute each before moving to the next. The BRMO was the first to have performed it using mostly (or all) Indian instruments, and was given the stamps of approval by the composer himself. 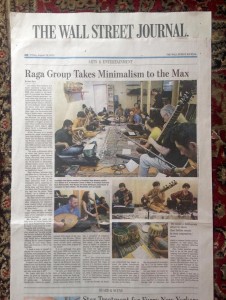 Sitarist and Brooklyn Raga Massive co-founder Neel Murghai did a marvelous job of organizing things. As the date approached, and we rehearsed a few times (not to mention some valuable press we got in the Village Voice and the Wall Street Journal), I once again became aware of how unique this performance was. First, I must mention that the musicians in the BRMO are all amazing musicians and amazing people. I am actually humbled and honored to share the stage with them. They are all skilled, dedicated, and inspired musicians.

(I must comment on the load in, set up, and sound check before the show. Sometimes these can get a bit harried. But there was a joyful exuberance throughout among the BRMO members as we set up, and skimmed through the music. Coffee was drunk, pizza was eaten. And there were a few moments of pure fun, such as when several members were backstage grouped around the piano playing jazz standards (imagine hearing “Someday My Prince Will Come” on a bansuri). At times, the musicians got out their iPhones, and googled the charts of the song the others were playing. At one point, tabla master and BRM co-founder Sameer Gupta picked up a bass and played a blues in F; which was the last thing I expected. It was fun!)

What made it a rare occasion for me is the fact of it being an orchestra. For my part, I’m accustomed to performing solo, or with small ensembles. The BRMO members took brief solos during the performance, but on the whole, the individual’s musical “self” was absorbed into the collective of the orchestra. Even this has contours that are not found in, say, a classical orchestra, because the element of improvisation is ever present, within the paradigms laid down by the composer. Yet, this all formed a collective and guided improvisation that’s unlike what happens with, say, free jazz. 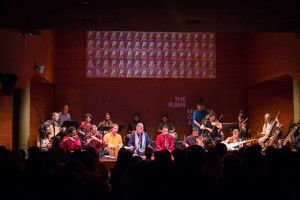 To illustrate, there were many times I found myself syncing up with one or more musician on a melody that was repeated. Sometimes, a group of two or three of us would sync up on a cell, and someone else would move on to the next while we remained where we were. It is a tribute to Riley’s genius that this not only always works musically, it opens the possibility for unique musical statements to rise from the performance.

But this was all in service to a single musical vision. It was strangely liberating to play and improvise the hour plus that we were on stage, and yet be absorbed in a musical process greater than one’s own individual voice.

This all created quite an intoxicating effect on not only the audience, but the performers as well. My wife later told me that during the performance, I would suddenly look up from my instrument with a look of happiness or amazement when someone played something particularly beautiful, or if some wholly unexpected music rose out of the performance. I was not alone in feeling this. Every member of the BRMO was in a state of heightened consciousness, and liberated spirit.

In fact, the performance was nothing like what we’d rehearsed, and nothing like any other performance of In C that the BRMO ever did – or anyone else since the piece was composed in 1964, for that matter.

There is an apocryphal quote attributed to Beethoven: “The vibrations on the air are the breath of God speaking to man’s soul. Music is the language of God. We musicians are as close to God as man can be. We hear his voice, we read his lips, we give birth to the children of God, who sing his praise. That’s what musicians are. And if we are not that, we are nothing.” 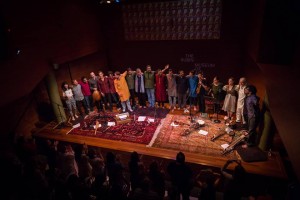 What was truly rewarding was knowing we gave the audience something unique and beautiful. This moment like that remind us of why we do this. We practice, put in years of work, and devote our lives to creating these moments wherein everything is more real than real, and a small glimmer of Divine Light is distilled into a brief moment in history that never was before, and never will be again.

This is what it means to be a musician.

The greatest reward I got from my participation in this concert was to be reminded of this in the most joyful manner possible.