At first glance, a dance class for people with Parkinson’s disease seems like a contradiction in terms. Parkinson’s is a degenerative disorder of the central nervous system whose most obvious symptoms are movement related. Yet Olie Westheimer, who was facilitating a Parkinson’s support group in Brooklyn, had a hunch that rigorous dance training with world-class dancers and live music was exactly what her members needed.

Olie Westheimer at Gel Health 2009 from Gel Conference on Vimeo.

“ The people who came to the group were so interesting and so diverse and so spunky and working hard to figure out how to help themselves solve problems. The next thing I noticed is: this is too much, they’re too wrapped up in Parkinson’s disease. That was becoming the way they defined themselves. I thought, people needed to remember who they were, because that’s what life is all about, trying to live your life doing what you want to do. I’m not out to save the world; I just got interested. I wanted to help these particular people because I thought they were really in need of more than they had.”

Drawing from her own ballet background , she decided that a dance class was the best way to go. She explains:

“Everything that helps a dancer move helps someone with Parkinson’s move.”

In 2001 she persistently contacted the Mark Morris Dance Group until they agreed to provide company members John Heginbotham and David Leventhal to teach monthly classes in their newly opened building in downtown Brooklyn.

The first classes were experiments in trial and error (some classes had as few as one student) but enthusiasm remained high. In 2003, spurred by a New York Times profile and word-of-mouth, the class became bi-monthly. Since then, the program has grown exponentially until versions of the Brooklyn model are now taught world-wide. I asked Leventhal, who bears a passing resemblance to Aamir Khan, what he had learned from the early years.

“ For a disease that robs people of their ability to express themselves physically, vocally and facially, it’s pretty significant to be able to come into a class and work on those skills and be in a place where you can do that safely. With Parkinson’s, your executive function is affected. So any time you can give people a map, for what to do and when, they’re very happy to have it. The essentials things are narrative, imagery and rhythm. Kathak, Ballet, Modern, and Tap and Flamenco have all those in spades. Indian Dance, in its various forms, is incredibly powerful as a medium for this particular operation.”

A CALL FROM INDIA

In 2007 Pune-based choreographer Hrithikesh Pawar heard about the Brooklyn program and decided to start his own Dance for PD class. Dancer Maithily Bhupatkar was sent to Brooklyn to train for a month and on her return they started. The first years were challenging. Pawar explains,

“It was difficult in general to talk about dance as a rehab space. I was putting down my foot saying that it’s not a therapy program, it’s a dance class. I think the whole idea of accepting a certain kind of a physical disorder or a disease in India is such a taboo that people don’t talk about it. They just keep it to themselves and they’re talking about everything else but what they need to. And the idea and the preconceived notion of being judged, which is already there in India, because there is a certain kind of a pressure, where you need to behave a certain type, you need to be a certain type, you need to be a certain kind, is so high. I think that was one of the challenges: to make these sixty year old, fifty year old men dance in front of these women, and these women, some of them who have never worked, I mean they have been housewives, and expecting them to dance. That was kind of nightmarish.” 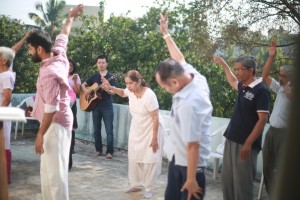 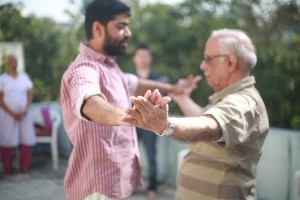 Nonetheless, Pawar and Bhupatkar persisted until those obstacles were overcome. Today, not only does the Pune Parkinson’s dance group meet three times a week, but classes have also started in Mumbai and Delhi. I asked Pawar who has since visited Brooklyn to observe and teach, how the Brooklyn students differed from the ones now in Pune. He replied.

“ It’s very strange, but I did not see a difference. In terms of the participation, in terms of the enthusiasm, in terms of the way they were communicating with each other, no; absolutely not. I told this to David, “ it is exactly how people in India behave”. Except what they were wearing..

Olie Westheimer, Hrithikesh Pawar and David Leventhal speak in strikingly similar terms about the meaning of their work.

Olie says: “my aim was to get people to think they could still participate. The thing that kills you in the end is being isolated. Something that would motivate you to get out; that’s important, and it’s very therapeutic.”

Hrithikesh: “I believe that a dance space is a community project in itself. Movement itself can bring in such a difference. I find immense peace, happiness and gratitude that I can do this”

David: “I walk into the Parkinson’s class and I see people reaching from the depths of their heart to create these movements. As we’ve developed, it’s become a family. I have this fantasy of doing different work, but how can I leave the family? I feel a real sense of shared meaning, that we’re doing something meaningful together. We don’t always know what that meaning is, but we know that for each other that it’s something that’s deeply significant. The reason that it’s so significant is that we’re bonded; we’re joined as a village.”

Richard Bennett is a jazz and world music composer and pianist. He has two releases in stores this year: Pure from Mystica Music and Mumbai Masala with Dhanashree Pandit-Rai from Times Music. He played the first Dance for Parkinson’s classes in Brooklyn and still works with the group.