The double bill at the CA Music Room of Kamran Hooshmand and SoSaLa promised to be a fascinating musical experience. This was the first time I attended an event at the CA Music Room. The venue (actually the home of photographer Clara Aich) was decorated in marvelous taste, and had fascinating art work throughout. The atmosphere was perfectly suited for enjoying music in an intimate setting. 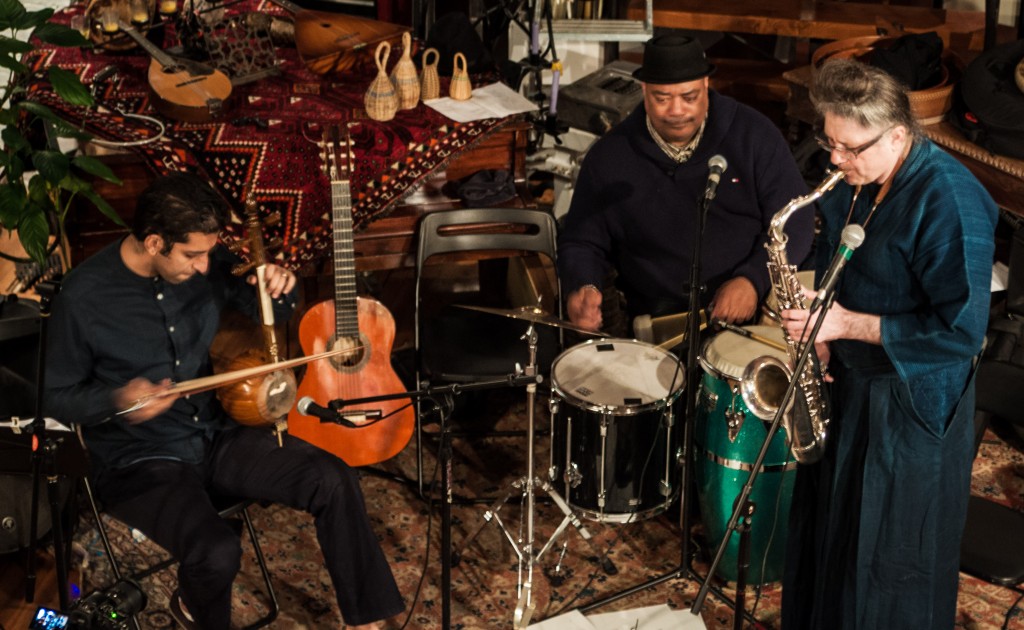 The evening’s performance began with Sohrab Saadat Ladjavardi’s latest incarnation of SoSaLa, featuring Baba Donn Eaton (Last Poets) on percussion and vocals and Kaveh Haghtalab on kamancheh. This evening is Ladjavardi’s first public performance in over a year.

Donning his trademark Kendo outfit, he began a saxophone melody, without preamble or introduction. The entire room became silent and all conversation ended. Baba began a percussion atmosphere, and both men chanted about beginnings and endings  and other explorations of truth. Haghtalab joined them on kamanche, with metallic wind like sounds. Saadat’s saxophone took over with a melody almost reminiscent of Coltrane’s “Alabama;” except with a very definable Persian contour. Haghtalab took over, the melody, and the music and spoken word drew the listener into Saadat’s vision.

The second piece began seemingly where the first left off. But then it took off in a different direction; to my ears (admittedly limited in knowledge about the subtleties of Persian music), it took the form of a maqam. Haghtalab took a solo that explores another avenue of the music. Eventually, Saadat returned with his own variations. 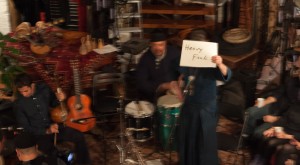 Throughout, Baba, exuding the vibe of a Buddha from Harlem, provided percussions that were both infectiously rhythmic and dreamily atmospheric. Their third piece “Heavy Funk” he began with a funky, Afro-Cuban conga movement, punctuated by more spoke word. Saadat soon stepped to the forefront and the two dominated the piece. 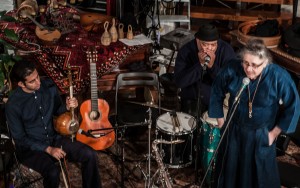 Then, they played “Everyday Blues”…a blues. Baba moaned on a harmonica. Saadat spoke about our blues; a modern blues applicable to all people. This became an introspective blues in a major key that seemed to want to morph into a minor tonality. In many ways, it was not a blues as an American would understand it; it seemed to seek a universal source of blues beyond genre or style.

Their next piece, “Sad Sake,” began with elements of Japanese Noh theater. Saadat’s saxophone soon brought things to another side. Haghtalab’s kamanche began to step to the forefront, after staying in the back for the last few pieces. At one point, he began to pluck the strings; an unorthodox technique that worked beautifully in this context.

The last piece “Khorasan,” was played at a lively pace. Haghtalab played his most lyrical and impassioned solo of the night. Saadat’s saxophone and spoke word underscored this passion beautifully.

Saadat’s hiatus from public performance was nowhere in evidence. His technique and ideas flowed easily, and his stage presence was relaxed and confident; and as pleasantly idiosyncratic as always. 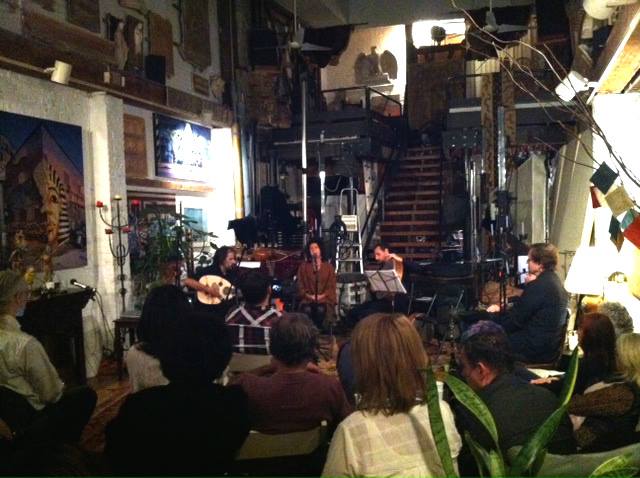 After a brief intermission, Kamran Hooshmand went on.

Hooshmand is an Iranian-American musician, ethnomusicologist and scholar residing in Austin, Texas. He performs regularly with the 1001 Nights Orchestra, Ojalá, and Texas Early Music Projects’ concerts of Medieval, Sephardic and Renaissance music. He has contributed to award-winning film and tv soundtracks from scoring silent films to IMAX and PBS documentaries. Unlike the big ensemble productions that he is normally associated with, in this NY concert, Kamran performed Middle Eastern/Balkan traditional, and original contemporary Persian songs based on the poetry of some of Iran’s prominent poets in an intimate, acoustic setting.

This performance was part of his first New York tour. He was joined by percussionist Alby Roblejo with special guests Ahmet Ergodular, Jeff Kahan and Dr. Galeet Dardashti.

They started with an Arabic piece “Sama’I Bayyati” that starts in bayyati, and changes to rast, and other maqam before returning to bayyati. He began on the barbat (Persian oud) with an unmetered invocation. The mood was quite inviting; occasionally going outside itself with unexpected notes. Then the main melody began with percussion in a 10 beat cycle. The movements to other maqam were quite evident; not startling or incongruous, but leaving you knowing a real change had occurred.

They continued with a 15th century love song in maqam rast. Ahmet Ergodular joined them on vocals. The vocals were quite profound in their emotional content. It was obvious, even to someone like myself who didn’t understand the words, that there was a great poetic sublimity here. The accompaniment was subtle, sparse, and created a soft, unassuming background for the vocals to speak.

The third song was a modern Sufi song called “Smoke Rises.” based on the poetry of Sohrab Sepehri. It spoke of a Sufi perspective of modern urban life, and one’s individual inner spirit. Hooshmand played guitar on this. He’d offered an English translation of the lyrics.

The next song was another modern piece: “The Fish.” based on the poetry of Ahmad Shamlu. This poem was written in Iran during the reign of Muhammad Rezah Shah, but Hooshmand put it to music in the early 1990s in Austin, Texas. In addition to guitar, Hooshmand played harmonica; a strange instrument to hear in Persian music. 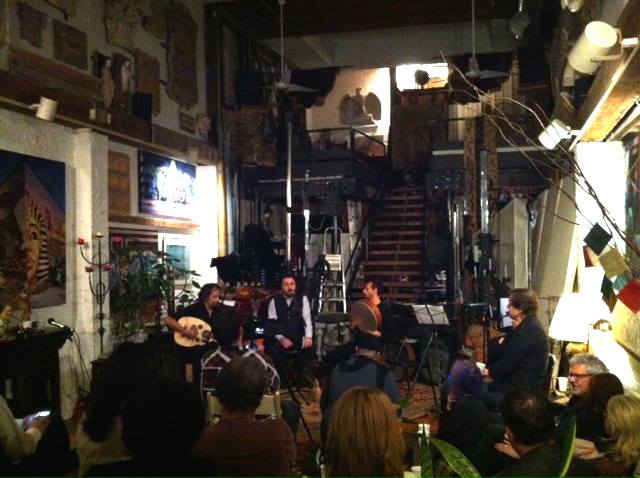 Returning to the barbat, he continued with a piece in a unique mode called “Ghrib.” Oboist Jeff Kahan joined them. The melodic flavor of the piece was full of delightful surprises; like eating at a buffet where each morsel presented you with a new and unexpected flavor. Kahan’s performance was wonderful.

After the all too brief song, they continued with an Andalusian / Moroccan piece dating to the 12th century. The mode was in al-sika, a similar mode to maqam sika. This song had a very happy, playful, and optimistic mood.

Next was a popular Andalusian piece “Lama Bada Yatathenna” dating to the 10th century. The song, played in s 10 beat cycle, was evocative of the movements of a beautiful woman.

“Brale Brale Se Sobrale,” an uptempo piece from Macedonia in an 11 beat cycle was next. They played this with the kind of easy reckless abandon the western ear often associated with Arabic music. The percussionist took an aggressive and highly imaginative solo.

Inviting vocalist Dr. Galeet Dardashti to join them, they delved into the Jewish tradition, and performed “Psalm 23.” Her performance was astonishing. Then she picked up a dumbek, and they performed a religious poem used on Yom Kippur.

The final piece was in maqam hijaz. Here, the deeply contemplative, almost sad mood was once again invoked. A fitting end for the concert.

House concerts like this are probably the best places to hear music like this. Concert halls are fine venues, but there is no match for the intimacy of these venues. One is allowed a close and often interactive participation in the music. And the music presented this night was best experienced in this setting.